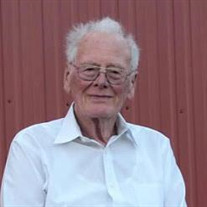 William (Bill) John Worgul, Jr. age 95, of Lansing, passed away peacefully on Wednesday, April 26, 2017. He was born in Coalport, PA on December 4, 1921 to the late William,Sr. and Martha Worgul. He chose to serve the Lord at age 16. After graduating third in his class from high school, he worked as a coal miner before serving in the US Army during World War II. It was during his tour of duty in Germany that he met and later married Ursula. They shared 44 years of marriage until her passing in 1991. Bill and his family made their home in Lansing where he had a career at GM (Oldsmobile). Bill enjoyed studying World War II, German history and culture, camping, golfing, and having fellowship with friends and family. He had a wonderful gift for telling stories, a joke or anecdote for every situationas well as a positive outlook that was always encouraging. Bill is survived by his children, Ingrid (Jon Burack) Gharai, Thomas (Kitty Groh) Worgul, and Effie (Ken Forde) Loree; sister Marie Annis; grandchildren Tiana (Dale) Ernsthausen and Cyrus Gharai, as well as two great-grandchildren. A memorial service celebrating Bill's life will be held on Saturday, May 6, 2017 at Royal Scot of Lansing, 4722 W. Grand River Ave. Lansing, MI 48906. A visitation will be held at 10:00 AM, with memorial service commencing at 11:00 AM, and a reception to share memories with the family immediately to follow. Private interment will be at Evergreen Cemetery in Lansing. In lieu of flowers, those wishing an expression of sympathy are asked to consider a donation to Royston Ridge, AFC., 10216 Royston Rd., Grand Ledge, MI 48837 or Great Lakes Caring, 19176 Hall Rd., Suite 130, Clinton Township, MI 48038. The family would like to express their deepest gratitude to all of Bill's caregivers for their excellent care and loving support in Bill's last months. Arrangements by the Holihan-Atkin-Barclay Funeral Home, Grand Ledge.

William (Bill) John Worgul, Jr. age 95, of Lansing, passed away peacefully on Wednesday, April 26, 2017. He was born in Coalport, PA on December 4, 1921 to the late William,Sr. and Martha Worgul. He chose to serve the Lord at age 16. After graduating... View Obituary & Service Information

The family of William John Worgul Jr. created this Life Tributes page to make it easy to share your memories.

Send flowers to the Worgul family.