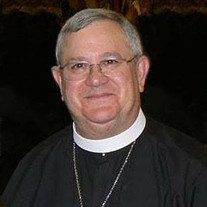 The Venerable William H. Fineout, age 69, died on June 14, 2016. He was born March 24, 1947, to Jane Ann High and Donald S. Fineout in Lansing, MI. After graduating from Haslett High School in 1965, he earned a B.A. in library science with a teaching certificate in 1969 and an M.A. in education leadership in 1974. During his 30 years with Fowlerville Community Schools, he worked as a librarian, athletic director, football coach, state champion cheerleading coach, and English teacher. Bill married Shannon Drotar on June 14, 1985. Together they raised their daughter Kathleen (Kassy) and helped raise his daughter Jill. After retiring, Bill began the Education for Ministry Program through the University of the South School of Theology in 2004. In 2006, he continued his education with the Ministry Studies Program through the Whitaker Institute, Episcopal Diocese of Michigan. He was a lifetime member of St. Katherine’s Episcopal Church, Williamston, which was the church of his diaconal formation. He was ordained to the permanent diaconate on June 21, 2008, and served at St. Paul’s Episcopal Church in Lansing from 2007-2013. He also served as chaplain for the local chapter of the International Order of St. Luke the Physician, national chaplain for the Doane Family Association of America, and was an instructor/ facilitator for the Whitaker Institute. He was appointed Archdeacon, Episcopal Diocese of Michigan, on February 25, 2013. Bill enjoyed sailing, golfing, deer camp, following Michigan State athletics, and had a love of anything Pure Michigan. He was passionate about everything he did, whether it was teaching, building decks, playing card games, telling jokes, fighting cancer, or serving God. He loved nothing better than presiding over backyard family celebrations in East Lansing. His pride and joy were always his children and grandchildren. He was preceded in death by his parents and brother, James. He is survived by his wife of 31 years, Shannon (Drotar) Fineout; his two daughters, Jill (Clif) Schneider, and Kassy (Colter) Sweeney; three grandchildren, Randolf, Dexter, and Kora Schneider; two sisters, Mary Jane (William) McGrath, and Ann Fineout; and several cousins, nieces, nephews, and friends. A memorial service will be held on Saturday, July 9, beginning 11:00 a.m. at St. Paul’s Episcopal Church, 218 W. Ottawa St., Lansing MI 48933. The Rt. Rev. Wendell N. Gibbs, Jr. will preside. Visitation one hour prior to service; a reception will follow. Please be advised of the 5K The Color Run Downtown Lansing, alternative routes to the church may be required please click link for map route and street closures (https://www.google.com/maps/d/u/0/embed?mid=143sYg7qaHrRIGRef3xyTA3-qJ0k) Contributions in Bill’s memory may be given to the Episcopal Diocese of Michigan, 4800 Woodward Ave., Detroit MI 48201-1399, or Ele’s Place, 1145 W Oakland Ave., Lansing MI 48905. Arrangements by the Holihan-Atkin-Barclay Funeral Home, Grand Ledge.

The family of William High Fineout created this Life Tributes page to make it easy to share your memories.

Send flowers to the Fineout family.