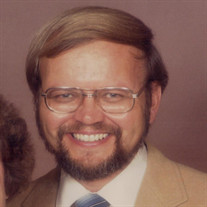 Wayne Martin Garchow of Grand Ledge passed away November 2, 2020 surrounded by his loving family. Wayne was born March 27,1937 in Saginaw, Michigan to the late Martin and Marguerite (Sands) Garchow. He graduated as Valedictorian from Saginaw High School Class of 1955 and attended the University of Michigan for his undergraduate studies. Wayne went on to receive a Master’s Degree from Michigan State University. He taught World History for 30 years at Waverly High School when it opened in 1963. Teaching history was Wayne’s passion, and reading was an integral part of his daily life. Wayne’s thirst for knowledge was contagious; allowing him to touch and inspire countless lives as an educator. Wayne was an accomplished woodworker whose favorite trademark was a four-leaf clover. He and Judy loved to dance and enjoyed the Harmony Club together for many years. Wayne actively worked with the Grand Ledge community by promoting the Grand Ledge Historical Society, Opera House, and Library. Wayne had the unique ability to make everyone feel important. As a deep thinker, he openly advocated for others. Wayne will be remembered for his intellect, compassion, generosity, and warmth. Wayne cherished his family. He is survived by his high school sweetheart and loving wife of 64 years, Judith (Bartels); daughters, Ann (John) Pohl and Karen (Rich) Friberg; daughter-in-law, Laurene Garchow-(Tom) Packer; grandchildren, Lyndsey Pohl, Emily (Jacob) Sommers, Kelsey and Kyle Friberg, Garrett (Sarah) and Lauren Garchow; great grandchildren, Owen Garchow and Henry Sommers. Wayne was preceded in death by his beloved son Mark; brothers, Marlin, Marwood and Edward. A Celebration of Wayne’s life will be held at a later date. Memorial contributions in Wayne’s name may be given to the Grand Ledge Area District Library, 131 E. Jefferson Street, Grand Ledge, Michigan 48837. Arrangements by the Holihan-Atkin-Barclay Funeral Home, Grand Ledge.

Wayne Martin Garchow of Grand Ledge passed away November 2, 2020 surrounded by his loving family. Wayne was born March 27,1937 in Saginaw, Michigan to the late Martin and Marguerite (Sands) Garchow. He graduated as Valedictorian from Saginaw... View Obituary & Service Information

The family of Wayne Martin Garchow created this Life Tributes page to make it easy to share your memories.

Send flowers to the Garchow family.