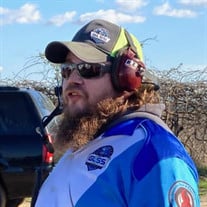 Travis C. Parks of Eaton Rapids passed away February 7, 2022 at home surrounded by his loving family. Travis was born October 11, 1979 in Lansing, Michigan to Jerry and Terry (Zumbaugh) Parks. He graduated from Grand Ledge High School and attended Lansing Community College. Travis worked along with his parents at the family business but for the past several years was able to follow his passion of sprint car racing and worked and travelled with sprint car series. Travis was in his element while working on the track and he loved the events and the people. He is survived by his parents Jerry and Terry Parks; partner, Rebecca Moccardine; spiritual daughter, Lydia; grandmother, LaVina Jacobson; uncle, Perry (Heidi) Parks; cousins, Aaron (Jessica) Parks, Hana (William) Carpenter and Haley Parks. A funeral service will be held Saturday, February 12, 2022, 11:00 a.m. at Calvary Grace Assembly, 915 Water Street, Eaton Rapids, Michigan 48827 with Pastor Rocky Wing, officiating. Interment will follow at Chapel Hill Memorial Gardens in Lansing. Visitation will be Friday from 2-4:00 p.m. and 6-8:00 p.m. at the Holihan-Atkin-Barclay Funeral Home, Grand Ledge and at the church Saturday from 10:00 a.m. until the time of the service. Memorial Contributions may be given to the American Cancer Society, Mid-Michigan Office, 129 Jefferson Avenue, SE, Grand Rapids, Michigan 49503 (https://donate3.cancer.org/?campaign=default&lang=en) or the Tunnels to Towers Foundation, 2361 Hylan Boulevard, Staten Island, New York 10306 (https://dogood.t2t.org/give/320847/#!/donation/checkout).

The family of Travis Christopher Parks created this Life Tributes page to make it easy to share your memories.

Send flowers to the Parks family.