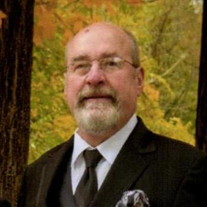 Thomas M. Williams of Grand Ledge a loving husband, father, grandfather, brother and friend passed away unexpectedly December 31, 2015. Tom was born January 10, 1950 in Lansing, Michigan to the late James A. and Betty A. (Collins) Williams. He was a Grand Ledge High School graduate Class of 1968, a Vietnam Army veteran and retired mail carrier in Grand Ledge for thirty-four years. Tom loved to tinker out in his barn whether it was helping a friend repair a vehicle, woodworking, hanging up a clock or license plate he had collected or just smoking a cigar. He was also a huge U of M fan. Tom is survived by his loving wife of over thirty-six years, Bettie (White); children, Megan Williams, Nate (Sara) Williams and Lindsey (Ryan) Lillywhite; grandchildren, Connor, Faith, Brady and Brooke; brothers, James “Mike” (Cindy) and Randy (Londa) along with several nieces and nephews. A celebration of Tom’s life will be held Thursday, January 7, 2016, 11am at the Holihan-Atkin-Barclay Funeral Home, Grand Ledge with Pastor Chuck Foerster of the Immanuel Lutheran Church, officiating. Memorial gathering will be Wednesday from 6-8:00pm at the funeral home. Memorial contributions may be given to the Wounded Warrior Project, P.O., Box 758517, Topeka, Kansas 66676. Share your memories and condolences online at www.holihanatkin.com

The family of Thomas "Tom" M. Williams created this Life Tributes page to make it easy to share your memories.

Send flowers to the Williams family.