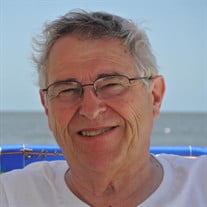 Thomas (Thom) Leon Huhn of Potterville, Michigan passed away March 23, 2020 surrounded by his loving family. Thom was born October 11, 1950 in Lansing to the late Leon and Marguerite (Zynda) Huhn. He graduated from Grand Ledge High School, Class of 1969, and worked in sales at Sundance Chevrolet. Thom’s 54 years in the auto business started as a teenager in the family business, Huhn Chevrolet. He was soon promoted to new car sales and later to General Manager. He stayed on with the dealership as it transitioned to Sundance Chevrolet, keepinghim in the “family business.” His love of automobiles started as a young child and he was a car man through and through. He enjoyed restoring cars, attending classic car shows, and was a fan of all types of auto racing. Friends and family enjoyed rides in the many restoration projects Thom completed, a favorite of which was a dune buggy he built the summer following his high school graduation and had lovingly maintained to this day. Thom had an infectious smile and a heart of gold. He was an amazing man! He is survived by his wife of over 19 years, Mary (Rodocker); sons, Robert (Michelle), Clint (Carol), Greg (Hannah) Rodocker, Geoff (Heather) Rodocker; 8 grandchildren; sisters, Nancy Huhn, Susan (Thomas) Kage, Diane (Carolyn) Huhn; brother, Phillip (Kim); and aunts, Jane Huhn, Georgia Fry, and Joyce (Ralph) Morr; as well as several nieces, nephews, and cousins. He was preceded in death by his parents, his uncle Lyle (Bettie) Huhn, and his aunt Wilma (Gene) Moyer. A public memorial service has been postponed due to Covid-19. When a day and time have been scheduled the service will be announced.. Memorial contributions may be given to the Grand Ledge Historical Society, P.O. Box 203, Grand Ledge, Michigan 48837. Arrangements by the Holihan-Atkin-Barclay Funeral Home, Grand Ledge.

The family of Thomas Leon Huhn created this Life Tributes page to make it easy to share your memories.

Send flowers to the Huhn family.