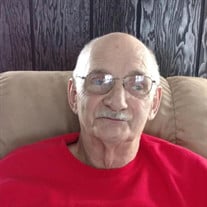 Thomas Clark Clay a lifetime Grand Ledge resident passed away unexpectedly April 27, 2020. Tom was one of ten children born to the late D. W. and Marguerite J. (Clark) Clay on July 22, 1943 in Lansing, Michigan. He graduated from Grand Ledge High School Class of 1961 and went on to be a long time Parts Manager starting with Huhn Cheverolet and continuing with Sundance. Tom was a hard worker and was known by many people in Grand Ledge and near his cottage on Houghton Lake as "Mr. Fix-It". Many will miss his friendship and also the ability to pick up the phone or stop by and ask for help with a car or small engine repair, plumbing, electrical or almost any other job. Tom would almost always stop what he was doing to lend a hand and solve a problem for his family or a friend. He is survived by his wife of over 55 years, Janet (Sedore); daughters, Kim (Scott) DeLashmit and Cindy (Les) May; siblings, Martha (Gordon) Woodman, Don (Rita) Clay, Doug Clay, Dan (Dana) Clay, Mary Deuel, Rob Clay, Theresa (Paul) Monaco, Laura Clay and Becky (Tom) Martin along with numerous nieces and nephews who loved him dearly. A graveside service will be scheduled at Meadowbrook Cemetery in Mulliken at a later time. Memorial contributions in Tom's name may be given to Grand Ledge Area Emergency Services Authority (GLAESA), 500 N. Clinton Street, Grand Ledge, Michigan 48837 or the Eaton County Sheriff Department, 1025 Independence Boulevard, Charlotte, Michigan 48813. Arrangements by the Holihan-Atkin-Barclay Funeral Home, Grand Ledge.

The family of Thomas Clark Clay created this Life Tributes page to make it easy to share your memories.

Send flowers to the Clay family.