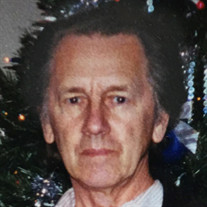 Stephen Frederick Graszler of Grand Ledge passed away November 2, 2016, while surrounded by his loving family. Steve was born in Portland, Michigan on November 28, 1937 to the late Francis Harold and Helen Elizabeth (Humphrey) Graszler. He was a long time member of the Grand Ledge community and a graduate of Grand Ledge High School in 1956. Steve served in the Michigan Army National Guard in Grand Ledge and worked for Servomation for over 20 years. Steve has always had a great passion for music, listening and performing. He was a vocalist and guitarist for the “Stardusters” band for many years. When he retired, he opened up the “50’s and Such” malt shop in a couple of different locations in Grand Ledge. In doing so, he was not only able to share his talents as an entertainer, but help others develop their skills as well. Steve’s priority was his family. He was very fortunate to have also acquired a community family and many special friendships along life’s path through his many community involvements including Color Cruise, Island Art Fair and Mudge’s Follies. For these activities and others, he will surely be missed. His love of music has been passed down to his family. Memories of Steve’s hobbies of motorcycles, admiration of classic cars, photography, family camping and boating, will be cherished as well. Steve was an earlier parishioner of St Michael Church where he and his wife, Patricia G (Jenerou) Graszler were married over 56 years ago. He is also survived by his four children, DeAnna L. (Rick) Sheren, Stephanie G. Beals, Stephen J. (Carolyn) Graszler, and Bethany A. (Jack) Pahl; seven grandchildren, Lelia Thomas, Stephen Sheren, Stacey Rice, Phil Graszler, Shelbey Sheren, Emma Pahl, and Olivia Pahl; he was blessed with seven great-grandchildren. He also leaves behind his sister, Mary (Dan) Backus. Steve was preceded in death by his parents and brother, Lawrence H. Graszler. A funeral service will be held on Tuesday, November 8, 2016, 1:00 PM at the Holihan-Atkin-Barclay Funeral Home, with the Reverend Fr. James Eisele officiating. Interment will follow at Oakwood Cemetery. Visitations will be on Monday from 4:00 - 8:00 pm and Tuesday noon to 1:00 PM, both at the funeral home. There will be a luncheon held at St Michael Church Parish Hall after the burial.

Stephen Frederick Graszler of Grand Ledge passed away November 2, 2016, while surrounded by his loving family. Steve was born in Portland, Michigan on November 28, 1937 to the late Francis Harold and Helen Elizabeth (Humphrey) Graszler. He... View Obituary & Service Information

The family of Stephen F. Graszler created this Life Tributes page to make it easy to share your memories.

Send flowers to the Graszler family.