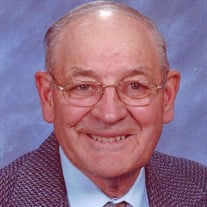 Simeon (Sam) Loeb, 89, passed away Friday, December 18, 2020 at his home, with his children by his side. Sam lived a full life with family and friends. He enjoyed hunting, fishing, gardening and staying committed to his faith. He was a parishioner at St. Michael’s in Grand Ledge. Being a faithful member of the church, he always volunteered for the Parish Festival, and was a Loyal Member of the Knights of Columbus. He participated in the tootsie roll drive, cutting wood for charity and most importantly, was the founding member, and organizer working very hard annually on the Wild Game Dinner, an event that he and his wife enjoyed together. He was also a member of the Cole-Briggs Memorial Honor Guard. Sam was born in Raleigh, North Dakota, he was the 7th of 10 children. Seven siblings have preceded him in death. When he was old enough, he left home to join the U.S. Army, serving in Korea during the Korean Conflict. After an honorable discharge from the military, Sam moved to Grand Ledge, and began working for his future brother-in-law, building homes. He also worked at Fisher Body, and Oldsmobile, where he retired after 32 years of service. Shortly after moving to Grand Ledge, he met Barbara Rabbai, they married in 1957. They had five children, four of whom are surviving. Teresa (Chris) Manning, of St. Johns, Lisa (Pat) Malloy, of Grand Ledge, Deanna (Tim) Schuchaskie, of Lansing and PJ (Amanda) Loeb of West Olive. Sam was preceded in death by his wife Barbara in 2000, his son Michael in 1999 and daughter-in-law Pamela in 2012. Sam is survived by 11 grandchildren. Elizabeth (Dave) Jensen, Michael (Ginelle) Manning, Amanda (Eric) Haueter, Ashley Malloy, Abbey (Brandon) Swagart, Allison Malloy and partner Kenny Gunderman, Andrea Malloy, Samantha (Corey) Tijerina, Chris Schuchaskie, Tyler (Allie) Schuchaskie, and Tyler Loeb. He loved attending their many dance recitals, musicals, football games, baseball and softball games. Also surviving, 6 great grandchildren; Michael, Claire, Sophie, Simeon (Sammy), Maximus, Lucius, Naomi and Stella. Sam is also survived by 2 sisters; Angie Kopp, and Irene (Fred) Rieger, 2 sister-in-laws; Beverly Swint, Connie Gamel, brother-in-law, Norman Beal and numerous nieces and nephews. A Celebration of Life will be Celebrated at St. Michael’s Catholic Church on July 24, 2021 at 11:00 am with interment to follow at Strange Cemetery. In lieu of flowers, memorial donations can be made to Saint Michael Catholic Church, 345 Edwards Street, Grand Ledge, Michigan 48837 Fisher House, 12300 Twinbrook Parkway, Suite 410, Rockville, MD 20852( https://engage.fisherhouse.org/site/Donation2?2262.donation=form1&df_id=2262&mfc_pref=T), the Gary Sinise Foundation, P.O. Box 368, Woodland Hills, CA 91365 (https://www.garysinisefoundation.org/donate/) or the charity of your choice. Arrangements by the Holihan-Atkin-Barclay Funeral Home, Grand Ledge.

Simeon (Sam) Loeb, 89, passed away Friday, December 18, 2020 at his home, with his children by his side. Sam lived a full life with family and friends. He enjoyed hunting, fishing, gardening and staying committed to his faith. He was a parishioner... View Obituary & Service Information

The family of Simeon Loeb created this Life Tributes page to make it easy to share your memories.

Send flowers to the Loeb family.