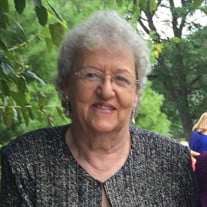 Shirley I. Warren lifelong Grand Ledge resident passed away September 3, 2019 at home surrounded by her loving family. Shirley was born April 20, 1935 in Grand Ledge to the late Arey and Emma (Storm) Acker. She graduated from Grand Ledge High School Class of 1953. She retired from U.S. Postal Service as a Rural Letter Carrier and was a longtime faithful member of Grand Ledge First Congregational UCC. She was an avid bowler and enjoyed knitting, she made lap blankets for the Grand Rapids Veteran’s Home. She looked forward to going to dinner with her friends several time each week but most of all cherished her role as a mom and grandma. She is survived by children, Doug (Pat), Todd (Kristi) and Cheryl Warren; grandchildren, Detra (Ben) Telgenhof, Bryon (Leann)Warren, Tori Warren, Dustin Behnke, Tyler (Kaylee) Behnke, Jason (Kelly) Abfalter and Caleb Abfalter. Shirley was preceded in death by her husband, Ron in 2003; grandson, Todd Warren II; siblings, Maxine Fielder and Arey “Pete” Acker. A funeral service will be held Friday, September 6, 2019, 11:00 a.m. at Grand Ledge First Congregational United Church of Christ. Visitation will be Thursday from 4-8:00 p.m. at the Holihan-Atkin-Barclay Funeral Home, Grand Ledge and Friday at the church from 10-11:00 a.m. Memorial contributions in Shirley’s name may be given to Sparrow Foundation, Hospice Services, 1215 E. Michigan Avenue, Lansing, Michigan 48912 (https://www.sparrowfoundation.org/give).

The family of Shirley I. Warren created this Life Tributes page to make it easy to share your memories.

Send flowers to the Warren family.