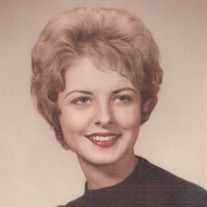 Shirley A. Titzer of Grand Ledge formerly Vero Beach, Florida and Evansville, Indiana passed away March 25, 2015. She was born November 8, 1942 in Evansville, Indiana to the late Lloyd G. and Betty A. (Rumpf) Whipple. Shirley went on to complete... View Obituary & Service Information

The family of Shirley Ann Titzer created this Life Tributes page to make it easy to share your memories.

Send flowers to the Titzer family.