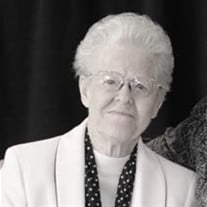 Ruth Elizabeth Westfall Maguire of Battle Creek passed quietly at home at Pennfield Premier Living residence surrounded by family on July 10, 2015. Ruth was born December 8, 1921 in Clinton County, Michigan to the late Harper and Hazel (Strouse) Westfall. She was preceded in death by her beloved husband, Laurel LaVail Maguire, brothers, Tom and Charles Westfall, sister Fern Howe, and son-in-law, Ron Wilcox. Along with her faith and pastoral ministry with LaVail, her greatest joy has been her 3children, Roger (Pat) Maguire, Carolyn Wilcox, Marlene (Len) Lawson, and their families: 9 grandchildren, Michelle, Lisa, Scott, Rodney, Carla, Cheryl, Rick, Matthew and Elizabeth. And 14 great-grandchildren: Alex, Cynthia, Madison, Brady, Baylee, Brandon, Jack, Sam, Grace, Lauren, McKenna, Stanley, D’Right, and Shaymar. During the past 22 years Ruth actively attended Andrus Street Church of God, where she and her husband previously pastored and also attended Calvary Baptist Church with her family. Ruth and her husband, LaVail, ministered in Michigan for over 50 years pastoring churches in Munising, Cash, Port Huron, and Battle Creek. She spent the majority of her life serving God, her family, and others. She liked to stay busy and work with her hands, baking, cleaning, gardening, sewing, crocheting, and decorating among other activities. She loved to serve and could work circles around most people. She continued visiting and ministering to people after her husbands’ passing in 1993 until she could no longer drive. Many people have been blessed by her homemade bread and cookies. Ruth spent the last 7 years in the care of, and surrounded by, her family. She will be greatly missed but has left a great legacy and is home now in the presence of Jesus and reunited with LaVail. Graveside interment service at Oakwood Cemetery, Grand Ledge MI, Tuesday, July 14th, 11am A Memorial Open House will be held at CityLinC Ministries, 82 Calhoun St., Battle Creek, MI, Tuesday, July 14th 5:30pm-8pm (additional parking at Charitable Union ) Ruth's family would like to express their heartfelt gratitude to the phenomenal staff of Centracare, Pennfield Premier Living and the Cretsinger family, and Bronson Hospice BC, for their exceptional, compassionate care of mom and support for our family. In lieu of flowers the family requests that memorial donations be made to The Gideons International, P.O. Box 140800, Nashville, Tennessee or Andrus St. Church of God, 765 Andrus Street, Battle Creek, MI 49014. Arrangements by the Holihan-Atkin Funeral Home, Grand Ledge.

The family of Ruth E. Maguire created this Life Tributes page to make it easy to share your memories.

Send flowers to the Maguire family.