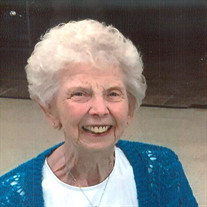 Heaven has gained a sweet adorable angel. Ruth Ellen (Tuthill) Ludlum of Battle Creek, formerly of Grand Ledge, passed away on December 3, 2018 in Battle Creek after recently being diagnosed with cancer. Ruth was born October 9, 1931 in Concord, Michigan to the late Chauncy and Josephine Tuthill. She graduated from Albion high school class of 1949 and from Michigan State University with Bachelor and Master degrees in Home Economics Education. She worked for many years as a teacher in several school districts (Otsego, Lansing, Ann Arbor, Wyoming) until she had children. She was a long time member of Westminster Presbyterian church in Lansing. She enjoyed being the hostess for numerous family gatherings over the years, raising her children, and helping out when ever needed at her husband’s pharmacy, Smith Pharmacy. Two of her life long hobbies were playing bridge and walking. She enjoyed playing bridge with her Lansing ladies’ group for over 40 years and with her new friends at Northpoint Woods in Battle Creek the past 3 years. She was known as ‘the lady who walks’ in any neighborhood she lived in and enjoyed getting to know her neighbors that way. And she loved to bake. If you were ever lucky enough to have one of her cinnamon sticky buns, or a piece of her Texas sheet cake or apple pie then you know her talents in the kitchen. She married Robert E. (Bob) Ludlum August 1, 1959 in Concord, Michigan and they had over 51 years of fun times together. She is survived by her son, Michael Robert (Julie) and grandson, Steven of Negaunee and grandson, Eric of Waterford; daughter Carol Jo (John) Maurer and grandchildren Joellen, Jackson, and Joshua of Marshall; sister, Betty Clark; brother-in-laws Francis (Irma) Moss and James Ludlum. She was preceded in death by husband Bob and brothers Scott, Burr, Guy and Tom. Per Ruth’s wishes, cremation has taken place and a private family memorial will take place at a later date. Charitable donations may be made to The Humane Society, Michigan State University or the American Cancer Society. Arrangements by the Holihan-Atkin-Barclay Funeral Home, Grand Ledge.

The family of Ruth E. Ludlum created this Life Tributes page to make it easy to share your memories.

Send flowers to the Ludlum family.