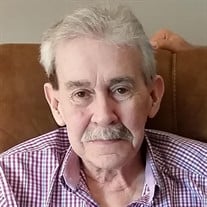 Lets start off by saying Roy Plowman (or “Pop” as nicknamed by his exceptional granddaughter) would not want an obituary. He certainly wouldn't write his own. If you bugged him enough, he would likely concede and say “whatever”. “Just don't make it very long”. “Write about my grandkids” would probably come out of his mouth. Being the center of attention just wasn't his way. - Don’t worry, Pop. We will keep it short. Chances are, if you knew Pop, you knew he lived his life his own way. He wasn't a man to suffer fools or to listen to bullshit. If you were a friend, then it meant you were a close friend. You were family. He would have your back in a shaky situation, drop a joke when you least expected it, he'd be there when you needed him with a smile and a pair of work gloves. He was that kind of guy. For the family that grew up in the wake he made, he showed us how to be humble and show respect. He taught us to dust ourselves off and get back up when life knocked us over. Watching him through the years taught us to protect those who aren't as strong as we are. He taught us to never start a fight, but sure as hell do you best to end one. Most importantly, he showed us how to live, simply by watching him. Before he was sick, there was a good chance that on any given day you'd catch him reloading shotgun shells to support his clay shooting habit or reading motorcycle magazines to check the specs on the next year’s motocross bikes. Hunting anywhere between Wyoming and Michigan for anything from pheasants to antelope was something that couldn't be missed. Did we mention cars? Pop made owning cool cars a lifestyle since he was old enough to look over a steering wheel. Rumor is a Mercury lead sled had a hand in catching the eye of his wife of 57 years. For 57 years Non (another nickname by his beloved granddaughter) and Pop laughed and loved and navigated life's ups and downs. We could go on and on about two stroke 750 Kawasaki triples, “The Great Bike Race”, and scaring bears away by growling at them in the woods. We could remind you of a maneuver call “Twofer Tuesdays”. We could try to convince you that he shot so many shotgun shells that he wore a hole in the side of a Browning shotgun. We could tell you that in Pop’s world, 4 wraps of duct tape is unacceptable. No matter how many times you roll your eyes, your going to get 7 wraps, because 7 wraps are better. We could share all sorts of stories, and we would laugh and celebrate a life lived well. But we wont do any of that stuff. Pop wouldn't want us to. He’d tell us to go out and make new memories and quit wasting time. Pop is off hunting with his dog. He’ll meet us for coffee in the morning when we all catch up to him. Roy D. Plowman of Delta Township passed away July 12, 2018. Roy was a loving husband, father and proud grandpa who will be missed by his family and the many lives he touched. Roy was born May 14, 1938 in St. Johns, Michigan to the late Forrest and Florence Plowman. Roy worked for General Motors for 38 years, retiring as a Journeyman Painter. He is survived by his beloved wife of over 57 years, Joyce; children, Bambi (Jerry) Banks and Roy II (Jennifer) Plowman; grandchildren, Kaitlin and Roy III; sister, Barbara and several nieces and nephews. Roy was preceded in death by sisters, Betty, Beverly, and brother, Bob. In lieu of contributions and visitation, Roy would have requested individuals spend time with their family and loved ones. Arrangements by the Holihan-Atkin-Barclay Funeral Home, Grand Ledge. Please share your memories and condolences online at www.holihanatkin.com

Lets start off by saying Roy Plowman (or &#8220;Pop&#8221; as nicknamed by his exceptional granddaughter) would not want an obituary. He certainly wouldn't write his own. If you bugged him enough, he would likely concede and say &#8220;whatever&#8221;.... View Obituary & Service Information

The family of Roy D. Plowman created this Life Tributes page to make it easy to share your memories.

Lets start off by saying Roy Plowman (or “Pop” as nicknamed by...

Send flowers to the Plowman family.