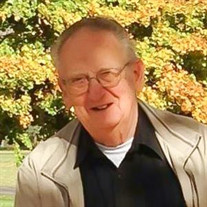 Robert Bruce Berry October 29, 1938 – October 31, 2018 Robert “Bob” Berry, 80, was promoted to Heaven on October 31, 2018. He passed peacefully, with Barbara, his devoted wife of 60 years, at his side. He grew up in Bellevue, Michigan, where he met his sweetheart, Barbara Clay. They married in 1958 and moved to Lansing where they raised three sons. Bob shared his love for fishing and hunting with the boys, and created many special memories of family time at the lake and in the woods. He always enjoyed watching deer with Barb. A longtime member of Mount Hope Church, he faithfully served in various ministries. After working at Michigan Bell/AT&T for 30 years and General Datacom for 10 years, he owned his own communications company and enjoyed helping many local churches with their phone systems. He is survived by his wife, Barbara, sons; Vincent (Michelle), Kevin (Renee) and David (Toni); 8 grandchildren; 11 great-grandchildren; brother, Corlis Berry; and sister, Janet Rogers. A memorial service will be held at Noon on Monday, November 5, 2018, at Mount Hope Church, 202 S. Creyts Rd, Lansing, with Pastor Kevin Berry officiating. The family will receive friends for one hour prior to the service at the church. In lieu of flowers, memorial contributions can be made to Mount Hope Church in honor of Bob. Arrangements by the Holihan-Atkin-Barclay Funeral Home, Grand Ledge.

The family of Robert B. Berry created this Life Tributes page to make it easy to share your memories.

Send flowers to the Berry family.