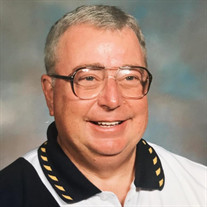 Robert “Bob” Douglas Barker, age 73, of Middleville, MI, passed away on March 4, 2020 in Rifle, Colorado. Bob had battled for years with Diabetes, Congestive Heart Failure, and Kidney Disease. Bob was born May 24, 1946 and lived most of his life in Grand Ledge, Michigan. He was the son of George Archibald Barker and Maxine Gates Barker. Bob attended Grand Ledge Schools where he played basketball, football, and tennis. He then went on to Central Michigan University where he earned his Bachelor’s Degree in teaching and longed to go back to his hometown to teach and coach. He got his wish and was hired in 1969 at Sawdon Middle School to teach and coach. Bob also taught Math and Phys Ed at Beagle Middle School and Grand Ledge High School. He met his wife, Darlene, while volunteering at a Chrisitan Bible Camp in Shephard, MI. They were married June 9, 1973. Bob earned his Master's Degree from Michigan State University in 1978. They had three wonderful children Rebekah, Robby, and Randy. Bob was a long-time member of the Grand Ledge Baptist Church and taught Sunday School to young people for many years. Bob continued his teaching career for 34 years and loved being able to teach and coach in the community where he grew up. Bob touched so many young lives with his countless, selfless hours especially with his coaching of basketball and tennis teams. He always strived to be a positive influence in their lives. His greatest joy was to be able to coach his three children in their different sports. After he retired in 2003, Bob continued to coach with his lifetime friend Robert Byington for the next few years. Bob and Darlene moved to their cottage at Gun Lake after retirement and wintered in Florida for several years. The last two winters they have lived with their daughter, Rebekah, and her family in the beautiful Colorado mountains. Bob is survived by his wife, Darlene, of nearly 47 years; daughter Rebekah (Paul) Downing of Rifle, CO; sons Robby Barker and Randy(Sara) Barker of Midland, MI; four grandsons, Luke Downing, Preston Barker, Jason Downing, and Jesse Downing; brother George G. Barker; mother-in-law Polly Becker; sister-in-law Tammy (Keith) Bobenmoyer; nieces Kristina Barker, Karyn (Josh) Newton, Casey (Neal) Hyde; nephews Jeff Barker and Ryan (Danielle) Mahaffy; and many cousins on the Barker and Gates side. He was preceded in death by his parents, his sister-in-law Katherine Barker, and many precious aunts, uncles and cousins. Visitation will be held from 2-4pm and 5-8pm on Wednesday, March 11th at Holihan-Atkin-Barclay Funeral Home in Grand Ledge, MI and from 12pm until the time of the Funeral service at 1:00pm on Thursday, March 12th at Grand Ledge Baptist Church in Grand Ledge, MI. Interment will follow at Oakwood Cemetery, Grand Ledge, Michigan. In lieu of flowers, a memorial fund will be set up in his honor for his four grandsons that he loved so dearly for their school and sports endeavors (Please make checks payble to Darlene Barker).

The family of Robert Douglas Barker created this Life Tributes page to make it easy to share your memories.

Send flowers to the Barker family.