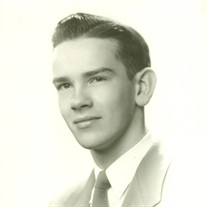 Richard W. Wooliever, age 81 of Mason, Died September 21, 2015. He was born November 22, 1933 in Port Huron, Michigan, the son of the late Earl and Ethel (Bell) Wooliever. Richard enlisted in the Navy in August of 1951, first stationed at Oak Knoll Naval Hospital in California. In considering the Korean Conflict, he requested duty with the First Marine Division, resulting in front-line duty of which he received the Naval Unit Commendation, the Korean Service Ribbon with battle stars, plus several other ribbons. One venture at this time was about a three weeks stay with the Marines during the peace talks at Pam mun jom, North Korea. Upon his return to the states, he later was employed in the Oldsmobile Division of General Motors in 1964. Richard also attended Lansing Community College and General Motors Institute in Flint. He retired from G.M. in June of 1992. Richard always liked to visit Port Huron so-as to watch the lake freighters and boats as seen from Pine Grove Park. Richard and his family made many trips with his recreation vehicles and visited most of the states, especially the Great Southwest. Richard put together several books on genealogy and located his 10th great grandfather who was born in Saarbrucken Rheinland, Germany in 1570. Richard’s last tome was hard-covered in May, 2007. Richard was preceded in death by his wife, Delphine; son, Denis; great grandson, Christopher; brothers, Charles and Eugene. He is survived by daughter, Denise (Richard) Sargent; grandchildren, Chrissy (Dan) Jenkins, Richard G. Sargent II, Jamie Hankins, Jennifer (Randy) Kill, Laura (Shane) Thornwall; great grandchildren, Alana and Nayah Jenkins, Nathan and Matthew Hawkins, Makayla and Denis Kill, Darrick Thornwall; sister, Yvonne (Jim) Mitchell; niece, Elizabeth Pelton of Port Huron and special friend Claudette Casello of Ann Arbor. Visitation will be Friday, September 25, 2015 from 11am until the time of the funeral service at 1:00pm at the Holihan-Atkin Funeral Home, Grand Ledge with The Reverend Joseph C. Jackson of the Community Baptist Church, officiating. Interment will follow with military honors at Oakwood Cemetery. Memorial contributions may be given to the VFW Post 2406, Color Guard, 695 Lansing, Rd., Charlotte, Michigan 48813. Share your memories and condolences online at www.holihanatkin.com When visiting Richard at Oakwood Cemetery in Grand Ledge, he requests the following: As you pass by, remember this, “As you are, I once was, as I am you soon will be”.

Richard W. Wooliever, age 81 of Mason, Died September 21, 2015. He was born November 22, 1933 in Port Huron, Michigan, the son of the late Earl and Ethel (Bell) Wooliever. Richard enlisted in the Navy in August of 1951, first stationed at Oak... View Obituary & Service Information

The family of Richard W. Wooliever created this Life Tributes page to make it easy to share your memories.

Send flowers to the Wooliever family.