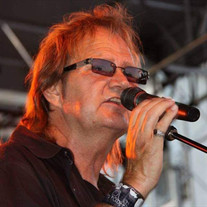 Richard “Rick” Hughes age 67 of Grand Ledge passed away at home with his loving family by his side on August 17, 2019. Rick was born March 30, 1952 in Fort Riley, Kansas to Richard and Mary (Schultz) Baysinger. His early school years were in Battle Creek then he attended Olivet Schools from 5th thru 11th grades and graduated from Holt High School Class of 1970. A few weeks after graduating, Rick hired into UPS and worked for over thirty-one years before retiring. He was a musician, DJ and saxophone player and his love of music was contagious. Sharing the music he loved so much was a conduit that allowed Rick to develop many lifelong close friendships. He was known as Sax Man and D.J. Ricky. He played in the Hughes Brothers and Frisco Bands and numerous other bands over the years. Rick was a proud grandfather also known as “boppa” who loved watching his grandchildren in their various sports, dance and activities. He is survived by his loving wife, Kathleen (Greenwood); son, Alex (Nikki) Hughes; daughter, Alana (Paul) Ruvolo; step-daughters Nikki (Alex) Hughes, Jessica Wells (Joseph) Clark; grandchildren, Ava, Kiana, Xander, Brody, Dash and Viviana; siblings, Joseph (Vickie) Hughes, Annie (Ron Evans) Baca and Maurice (Christal) Hughes; In-laws, Alvin and Kathleen Greenwood along with numerous nieces and nephews. Rick was preceded in death by his birth father, Richard Baysinger, adoptive dad, Robert Hughes; mom, Mary Hughes and brother, Matt Hughes. A funeral service will be held Monday, August 26, 2019, 1:00 p.m. at the Grand Ledge Opera House with The Reverend Chuck Jensen, officiating. Visitation will be Sunday at the Holihan-Atkin-Barclay Funeral Home, Grand Ledge from 2-4:00pm and 6-8:00pm and Monday at the Opera House from Noon-1pm.

The family of Richard "Rick" L. Hughes created this Life Tributes page to make it easy to share your memories.

Send flowers to the Hughes family.