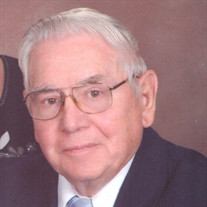 Richard August Peiffer lifelong Grand Ledge resident passed away May 22, 2020 surrounded by his loving family. Dick was born October 11, 1927 in Grand Ledge to the late August A. and Dortress L. (Ward) Peiffer Smazel. He attended Grand Ledge High School and proudly served his country in the Army of the United States Signal Core during WW II. Dick worked in home furnishings starting at Richards Furniture in Grand Ledge then Robinson’s and finally JW Knapp for 28 years. After leaving Knapp’s, Dick went to work as a Supervisor at the District Court in Lansing retiring in 1990. He loved his family and friends and looked forward to spending time with those who meant so much to him around a dinner table with food, fellowship and a game of cards. He especially looked forward to one of his special nieces, Jackie Johnson, Jeannie Schroeder or Mary Gidley bringing him an apple or lemon pie. Dick was a faithful member of St. Michael Parish and will be remembered for his work ethic and wonderful friendship to many. He cherished the opportunity to be Santa Claus for Knapp’s but would also carry the act home and peak in his children’s windows which gave them a treasured memory of their dad and as the grandkids came along he would be their Santa too. He is survived by his loving wife of nearly 68 years, Joyce M. (Springsteen); children, Michael (Denise), Rick (Diane); Patricia ( special son-in-law ,Pete), Mary Peiffer and John (Marcy); grandchildren, Dylan, Dustyn, Emily, Katie, PJ, Kelli, Patrick, Kerry, William, Paula, Amber, Caleb, John Jr. and Autumn; 21 great grandchildren with one on the way; sister, Donna Sweet; nieces and nephews, Mary Gidley, Jackie Johnson, Jeannie Schroeder, Jennifer Julius, Bob Edgar, Scott Sweet, Tony Sweet, Sue Shoemaker, Kathy Sipperly and Theresa Lippert. Dick was preceded in death by infant son, David; sisters and brothers-in-law, Doris and Don Butler, Betty and Jake Edgar and Philip Sweet; nephews, Jim Butler, Rick Butler, Bob Gidley and Mike Johnson along with in-laws, Harold and Martha Springsteen. A Mass of Christian Burial will be celebrated Saturday, May 30, 2020, 11:00 a.m. at St. Michael Catholic Church, Grand Ledge by Father James Eisele. Family and friends are invited to attend or watch the funeral mass for Dick on the St. Michael Church YouTube channel at this link https://www.youtube.com/channel/UC0cHJ0g9uMkkSu5m0qpg2OA/videos (Scroll down until you see May 30, 2020 - Funeral Mass.) Rite of Committal will follow at St. Joseph Catholic Cemetery. Visitation will be at the church Saturday from 10-11:00 a.m. Memorial contributions in Dick’s name may be given to St. Michael Catholic Church, 345 Edwards Street, Grand Ledge, Michigan 48837 or the Grand Ledge Food Bank, 4980 Burt Avenue, Grand Ledge, Michigan 48837. Arrangements by the Holihan-Atkin-Barclay Funeral Home, Grand Ledge.

The family of Richard August Peiffer created this Life Tributes page to make it easy to share your memories.

Send flowers to the Peiffer family.