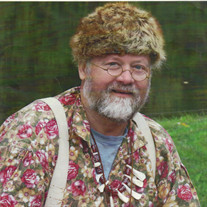 Randd L. Miller of Grand Ledge a devoted husband, proud father, grandfather, brother and friend passed away unexpectedly March 17, 2019. As an avid Spartan fan, he was very happy to see Michigan State beat Michigan in the Big 10 tournament. He was born June 17, 1948 in Lansing, Michigan to the late Glen G. and Murriel E. (Ames) Miller. Randd graduated from East Lansing High School Class of 1966 and worked in his family’s business, Okemos Dry Cleaners. He volunteered each year at the Color Cruise Island Festival in Grand Ledge with the fur traders, was a member of the Looking Glass River Sportsmen Club, and rendezvous group of close friends referred to as the Brothers of the Wind. Randd was known by many children in the area as Santa Claus. He loved children and looked forward to the fun and joy he could bring to the young people during Christmas. His niece, Jordan, said it best; Uncle (Santa) Randd was able to do around the holidays was much more than dressing up in simple Santa outfit. It was about his sense of community and family. It was about homeless pets and hopeful children and his great-nieces that adored him. It was about giving back in a way that most people never choose to do. He is survived by wife of over 27 years, Katie; children, Trisha L. Miller and Randy L. (Jamie); his best buddy, Reggie; grandchildren, Alicia Schmitz and Zoey, Nevaeh, and Marcus Miller; siblings, Rodney Mahaffey, Brian (Wanda) Miller and Brent Miller; several nieces and nephews along with some in-laws and out-laws, very special friends Riley and Gla’ Spayde and John and Carol Weigel. A Celebration of Randd’s life will be held Friday, March 22, 2019, 12:00 p.m. at the Holihan-Atkin-Barclay Funeral Home, Grand Ledge. Hawaiian shirts and period clothing are encouraged. Visitation will be on Friday from 10:00 a.m. until the time of the service at 12:00 p.m. Memorial contributions may be given to the Grand Ledge Chamber of Commerce Color Cruise and Island Festival, 310 Greenwood Street, Room B-103, Grand Ledge, Michigan 48837 or the Capital Area Humane Society, 7095 W. Grand River Avenue, Lansing, Michigan 48906.

The family of Randd L. Miller created this Life Tributes page to make it easy to share your memories.

Send flowers to the Miller family.