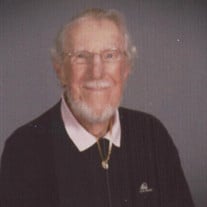 Preston Marvin Buitendorp, age 95, passed away early Monday, May 31, 2021 in Grand Ledge, MI, at the home of Geoffrey and Lynda Buitendorp. He was born September 21, 1925 in Muskegon, MI, to Lawrence Ralph and Jeanette Wierengo Buitendorp. He was the second of four boys, Ralph, Preston, Kenneth, and Charles Lee. Preston graduated in 1943 from Muskegon High School, where he played percussion for 6 years (including 2 years in junior high) in the Muskegon High School Band, four years as first chair. He also sang in a supporting role in the operetta “A Waltz Dream” by Johann Strauss. Preston continued to play percussion in various musical organizations, including the local 4H bands, well into his 20’s. Following graduation, he pursued various jobs, including working at the Muskegon Airport, before retiring from Continental Motors/Teledyne after 34 years. He was a member of the Muskegon Lodge 274, B.P.O. Elks, the Anna Maria Island Moose Lodge 2188, part owner and member of the Greens of Manatee Golf Course and member of the Saint Joseph Catholic Church of Bradenton, Florida. Preston spent the majority of his post-retirement years in Bradenton, where he played golf daily and entertained friends and family both local and international. He lived with his son Geoffrey and family for the last seven months of his life. Preston was also a patient of Hospice of Lansing and was lovingly cared for by Cindy, Kristen, and Kim in the last days of his life. Preston was a jovial spirit, consummate Dutchman, and avid lifelong golfer, a passion that spanned his entire life. He loved an early morning tee off at 7am, earning a buck or two for his par score and many “holes in one” (some occurring well into his 90’s). After 18 holes spent cracking wry, old-fashioned jokes with his fellow golfers, he would return home to get a start to the day. ‘Pres’ to his sweetheart, Aline (2014, wife of 32 years), ‘Dad’ to his children, Geoffrey (Lynda) Buitendorp, Lisa (Mark) Tomkovich, Larry (Linda) Rockey, and Yvan (Judith) Lanthier, and ‘Grandpa B.’ to his grandchildren, Erin (Paul Wozniak), Shawn, and Claire Buitendorp, Kelly (Kelvin) Jenkins, Megan (Brian) Cronley, and Matthew (Lauren Kiousis) Tomkovich. Knighted as ‘Great-Grandpa’ to Skylar Elisabeth Jenkins, Jack Danger Preston Wozniak, and Owen Patrick Cronley. He also cherished his many friends and relations, living in Michigan, Florida, Ohio, and Quebec, Canada. Preston was preceded in death by his parents, three brothers, beloved wife, Aline, and infant great-granddaughter, Avery Tomkovich. With his wife, Aline, Preston enjoyed traveling, often visiting her family in Quebec, Canada. After her passing, Preston kept Aline’s memory alive, regularly reciting anglicized French, to further remind him of his beloved. Always with a tune in his head that he strung into song, or tapping out rhythms on the steering wheel with his ringed fingers as he drove, he enjoyed genuine conversation and connection, whether it be at his house of worship, the server at his favorite restaurant, or with his friends and family. We love you, Dad (Grandpa and Great-Grandpa) – XOXO and lots of smooches. A graveside service will be held in Muskegon, Michigan, once the border between the United States and Canada is reopened, per restrictions imposed by the Covid-19 pandemic. Memorial donations may be made in Preston’s name to Saint Joseph Catholic Church – 2704 33rd Ave. W, Bradenton, FL 34205, Greens of Manatee Golf Club – 101 Cortez Rd. W, Bradenton, FL 34207, the Muskegon Lodge 274, B.P.O. Elks – 513 W. Pontaluna Rd., Muskegon, MI 49444, Anna Maria Island Moose Lodge 2188 – 110 Gulf Dr. S, Bradenton Beach, FL 34217 or Hospice of Lansing – 3186 Pine Tree Rd., Suite 1, Lansing, MI 48911. Arrangements by the Holihan-Atkin-Barclay Funeral Home, Grand Ledge.

Preston Marvin Buitendorp, age 95, passed away early Monday, May 31, 2021 in Grand Ledge, MI, at the home of Geoffrey and Lynda Buitendorp. He was born September 21, 1925 in Muskegon, MI, to Lawrence Ralph and Jeanette Wierengo Buitendorp.... View Obituary & Service Information

The family of Preston Marvin Buitendorp created this Life Tributes page to make it easy to share your memories.

Send flowers to the Buitendorp family.