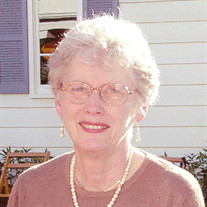 Phyllis J. Park of Grand Ledge a loving wife, mother, grandmother and friend passed away September 21, 2015 in Lansing. Phyllis was born March 4, 1927 in Hillsdale, Michigan to the late Kenneth and Bertha (Green) Powers. Phyllis graduated from Hillsdale College with a Bachelors Degree in education and started teaching. She stopped teaching to focus on raising and investing in her children and then ultimately retired from the Troy elementary public schools. She enjoyed babysitting her grandchildren when they were younger and always looked forward to spending time with her great grandkids. She had a great love for reading, which she shared with her children, and always looked forward to spending time in the Ft. Meyers area of Florida where she had many friends. She is survived by her husband, Donald J. of nearly sixty-seven years; children, Cynthia (Jay) Gowell, David (Nancy), Kathryn (Tom) Newell and Nancy (Phil) Kemp; grandchildren, Jeffrey, Noah, Stephanie, Amanda, Andrea, Jennifer, Audrey and great grandchildren, Olivia, Ava, Riley and Robert. Phyllis was preceded in death by grandson, Michael. The family will receive friends Saturday, September 26, 2015 from 11am until the time of the funeral service at 1:00pm at the Holihan-Atkin Funeral Home, Grand Ledge with Pastor John Lemke of the Grand Ledge Baptist Church, officiating. Memorial contributions may be given to the Association of Baptists for World Evangelism, C/O Philip and Kathleen McMillan, P.O. Box 8585, Harrisburg, PA 17105.

The family of Phyllis J. Park created this Life Tributes page to make it easy to share your memories.

Send flowers to the Park family.