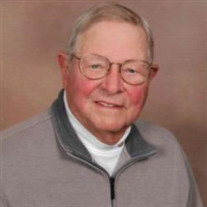 Paul Edward Faeth, Col. retired of Grand Ledge passed away December 21, 2020. Paul was born November 27, 1931 in Aschaffenburg, Germany to the late Edward and Susanna (Hahn) Faeth. He graduated from Alma High School Class of 1950, and attended Alma College where he met the love of his life, Barbara Jean Frick. Paul had a distinguished career serving his country in the Michigan Army National Guard, and US Army Reserve as a Field Artillery officer for over 50 years. He served in various capacities during his tenure including the Grand Ledge Battery Commander for the 1/119th Field Artillery. Paul retired with the rank of Colonel. Paul worked as a die sinker with General Motors and later for the Dana Corp. He also worked at MSU for a brief time as a machinist. He was a member of St. Michael Parish, Thirty Niners Association and the Elks Club. He enjoyed traveling, bird watching, hunting, playing cards, and watching boats on the St. Clair River. Starting with his military career, Paul developed an appreciation of firearms, competitive shooting and gunsmithing. In 1960 Paul became a founding member of the 5th Battery Michigan Light Artillery in the North South Skirmish Association. His experience as a competitive shooter and range official allowed him to act as a Line Judge in Pistol Shooting during the 1996 Olympics in Atlanta. He is survived by children, Michael (Arlene) Faeth and Maryanne (Daniel) Greketis; grandchildren, Elizabeth (Joel) Gray, Benjamin Faeth, Mallory (Ron) McCuin, Lindsey (Patrick) Magno, Rachel (Ken) Beaupre and Laura (Ryan) Bentz; great grandchildren, Austin, Haylee, Amelia, Henry, Jackson, Irene and Ezra. Paul was preceded in death by his wife of 62 years, Barbara Jean, and his eldest daughter, Michelle Faeth and her husband, Douglas Clark. A Mass of Christian Burial will be celebrated on Tuesday, January 5, 2021, 11:00 a.m. at St. Michael Catholic Church by the Reverend Fr. James Eisele. You may watch the funeral mass for Paul at 11:00 am Tuesday on the St. Michael Church YouTube channel at this link: https://www.youtube.com/watch?v=a81MsiXS_FU&feature=youtu.be. Rite of Committal will follow at East Lawn Memory Gardens in Okemos. Visitation will be Monday from 2-4:00 p.m. and 5-8:00 p.m. with a Scripture Service at 7:30 p.m. at the Holihan-Atkin-Barclay Funeral Home, Grand Ledge. Masks will be required for both the visitation and the mass. Memorial contributions may be given to the Fisher House Foundation, 12300 Twinbrook Parkway, #410, Rockville, MD 20852. www.fisherhouse.org. Share your memories and condolences online at www.holihanatkin.com

The family of Paul Edward Faeth created this Life Tributes page to make it easy to share your memories.

Send flowers to the Faeth family.