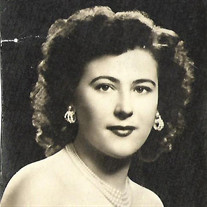 Mary Timmermann of Grand Ledge formerly of Sao Paulo, Brazil passed away April 3, 2018 in Delta Township, Eaton County, Michigan. She was born March 23, 1927 in Virginia, Minnesota to Nicholas and Amanda (Matasich) Kostelac. Mary moved to Benoit, Wisconsin with her family in 1928 and grew up on the family farm with her parents and eight siblings: Frank, Katie, Anne, Mike, Violet, John, Nick and Rose. She finished high school in Washington State while living with family and worked as a hotel waitress in Duluth, Minneapolis, Minnesota and Kansas City. She met her husband, (Hans) Ralph Timmermann in Minneapolis. He was born September 4, 1929 in Rio de Janeiro, Brazil. Mary and Ralph were married August 7, 1949 and moved to Rio de Janeiro where Ralph's parents leased and ran the Hotel Corcovado. They had one son, Roberto Timmermann, born May 19, 1953 in Sao Paulo, Brazil and he was born blind. As a result, the family moved to Miami in 1959 so Roberto could attend the school for the blind in St. Augustine, Florida. The family moved back to Sao Paulo where Mary ran a swimming school for many years. The school became famous because of Roberto's ability to swim long distances in the ocean. Roberto was successful and accomplished in many things in spite of the blindness including college graduation and becoming a lawyer. Later in life, Mary and Ralph retired and lived in Aguas de Lindoia, Brazil. Mary was preceded in death by her husband Ralph on September 7, 2002 and her son, Roberto on September 24, 2005 as the result of an accident. Mary moved to Grand Ledge, Michigan in 2011 to be near her sister, Violet, who was injured in an accident. She is survived by her sister, Rose Kostello (Neal) White and many (33) nieces and nephews. There will be no service but Mary will be laid to rest in Chapel Hill Memorial Gardens, Watertown Township, Clinton County, Michigan near her sister, Violet. Arrangements by the Holihan-Atkin-Barclay Funeral Home & Cremation Services, Grand Ledge.

The family of Mary Timmermann created this Life Tributes page to make it easy to share your memories.

Send flowers to the Timmermann family.