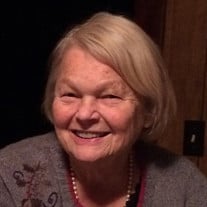 Having taught all who knew her the virtues of living with joy and love, Marlys Mildred (Maki) Pozega passed into God’s hands on Thursday, Nov. 1, 2018. She was 87. Marlys married Paul Pozega on Sept. 5, 1953. They were married for 65 years. Together, they built a busy and beautiful life and raised three children: Joan Magness, Debra Osburn (Chaz), and Paul (Julie), and were blessed with eight grandchildren. All of them survive her. In eternal life she is reunited with her beloved infant son, David, who passed away in 1954, and we believe she holds him now as she did then. Marlys was the second of four children of T. Oscar and Mildred Maki. She was born in the home in Bessemer, Mich., in which she grew up – a home she returned to often with her family to celebrate holidays, warm summer days and the joys of life in general. She graduated from A.D. Johnston High School in 1948, studied at Gogebic Community College and later earned both her bachelor’s and master’s degrees in education from Michigan State University. She taught in the Grand Ledge Public Schools for 26 years, and her students benefitted from her creativity, her commitment, and her firm belief that reading is the cornerstone of learning. Marlys loved to spend summers with family in Michigan’s Upper Peninsula. She loved to play cards and the occasional bingo game; loved camping at Crystal Lake; loved playing the piano, and loved it when others learned how to play, too. She loved Christmas and all that it brought: the laughter, the giving, and gathering of family together. More than anything, she loved her seven grand-daughters and her grandson: Lindsay Pierce, Alison Pierce, Jaclyn Konen (Ryan), Krista Magness, Cherie Corden, Anna Osburn, Jenna Magness, and David Pozega. From her they learned the power of unconditional love. In addition to her husband, children, and grandchildren, Marlys is survived by her sisters, Janet Hellman (John) and Judy Smith (Ed), with whom she has shared many an adventure, as well as many nieces and nephews across several generations. She was predeceased by her brother, Roland Maki, and his wife, Donna. A visitation is scheduled from 2-4 and 6-8 p.m. Sunday, Nov.4, at Holihan-Atkin-Barclay Funeral Home, 406 N. Bridge St., Grand Ledge. Marlys will be interred at Hillcrest Cemetery in Bessemer.

Having taught all who knew her the virtues of living with joy and love, Marlys Mildred (Maki) Pozega passed into God&#8217;s hands on Thursday, Nov. 1, 2018. She was 87. Marlys married Paul Pozega on Sept. 5, 1953. They were married for 65... View Obituary & Service Information

The family of Marlys M. Pozega created this Life Tributes page to make it easy to share your memories.

Having taught all who knew her the virtues of living with joy...

Send flowers to the Pozega family.