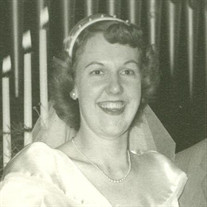 Nelson A. and Marion D. (Kebler) Ketchum are together again, Nelson passed away on October 17, 2015 surrounded by family holding his wife’s hand. Marion joined Nelson on October 20, 2015 surrounded by her children and grandchildren. Nelson A. Ketchum was born August 21, 1922 in Laingsburg, Michigan to the late Ray and Myrtle (Whitney) Ketchum. Nelson completed the eighth grade and went to work on the farm with his dad. He was a farmer at heart and enjoyed the work so much that he raised his family doing what he loved. Nelson also worked for the John Deere Co. in Lansing. He had a hobby of collecting and restoring John Deere Tractors. He is survived by sister, Rayola Lane and was preceded in death by sister Doris Strouse and brother, Alyin. Marion D. Ketchum was born May 21, 1925 in Grand Ledge, Michigan to the late Louis and Mildred (Nostrant) Kebler. She graduated from Grand Ledge High School Class of 1944 and worked for a brief time at JC Penny before her oldest son was born and then her focus was staying home to raise her boys. Marion enjoyed sewing, knitting, crafts and working in the flower garden. She also enjoyed cooking and sharing her special treats like cookies, cakes and pies with her family. Marion cherished spending time with her grandchildren and great grandchildren the most. She was preceded in death by siblings, Margaret Schaffer, Floyd and Kenneth Kebler. Nelson and Marion were married on November 1, 1952 and were on life’s journey together for just a few weeks shy of their sixty-third wedding anniversary. Their commitment and love for one another is represented not only in their marriage but also in the legacy of their sons, daughter-in-law, grandchildren and great grandchildren. The love they had for one another and the value they placed on family are some of the reasons why it will be so difficult to say good bye. They are survived by sons, Mike (Debbie), David and Daniel; grandchildren, Michael (Larissa); Randi (Clint) Tollison, Travis, Heather (Kenny) Hager, Lucas (Heather) and Gavin; great grandchildren, Clint, Brandi, Logan, Khole, Levi, Sophia, Easton and Nikki. A funeral service will be held for both Nelson and Marion Friday, October 23, 2015, 11:00 am at the Holihan-Atkin-Barclay Funeral Home, Grand Ledge with The Reverend Amee Paparella, Officiating. Visitation Thursday 2-4:00pm and 6-8:00pm at the funeral home. Memorial contributions may be given to Sparrow Foundation, Hospice House of Mid-Michigan, 1110 E. Michigan Avenue, P.O. Box 30480, Lansing, Michigan 48909

The family of Marion D. Ketchum created this Life Tributes page to make it easy to share your memories.

Nelson A. and Marion D. (Kebler) Ketchum are together again,...

Send flowers to the Ketchum family.