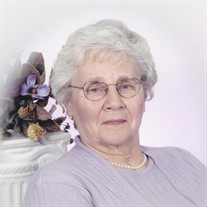 Margaret A. (Pitonyak) Forrester, age 84, of Grand Ledge Michigan, died on April 22, 2017, surrounded by the love of her family. Marge was born in Niagara Falls NY on April 6, 1933, daughter to John and Anna (Dolak) Pitonyak‎, and sister to John Pitonyak, Dorothy Podsiadlo, Mary Nowak, and Barbara Trubisky. It was in Niagara Falls that she met and fell in love with her beloved Fred, her husband of 61 years. Marge graduated from Buffalo General School of Nursing and it was there that she honed the art of compassionate nursing, which she used throughout her life, in everything she did. Marge and Fred have nine children, each possessing a university education, and twelve grandchildren, all of whom bring light and love to their grandparents' lives. In addition, they have an extended circle of family and countless friends who contribute loving richness to their lives. She is preceded in death by her husband, her parents, and her sisters Dorothy and Mary. Marge is survived by their children: Mary Ann and John (Akron OH); Eileen (Verona PA); Rick and Linda (Canonsburg PA) and their sons Eric and Kevin; Joe and Adriana (Falls Church VA) and son Shane; Betty and Bill (Rockford IL) and their children Seth and Anna; Pat (Fenton MI); Kathleen and Daniel (Tomball TX) and their son Alex; Tom and Paula (Cohassett MA) and their daughters Jillian and Allyson; and Tim and Kelley (Bloomfield Hills MI) and their sons Blake, Macklin, and Riley. Marge was committed to your cause--unrelenting in her support and unequivocal in her conviction. Her compassion was without restriction and her love consistent, unconditional yet not blind. She consumed the joy her children and grandchildren provided her and celebrated your success with unbridled passion, while maintaining dignity, grace, and humility. Marge was the consummate "Mama Bear" vigilant in protecting her den--which extended to all of humanity. Her professional commitment extended in every aspect of her life, and lived to serve under any circumstances to aid and comfort those in need. Marge was always available to provide a calming ear, a soothing word, or the answer that seemed to be unfindable in terms that were simple and relatable. She demanded excellence in education and commitment to others. No one would laugh more sincerely than Marge, nor could anyone walk away from Marge without realizing they just made a lifelong friend. She became your advocate and biggest fan. Marge and Fred's behaviors defined salt of the earth and demonstrated the greatest love story ever lived. In lieu of flowers, and in keeping with Fred and Marge's dedication to education and their community, donors are asked to make donations to the chosen religious institution or charitable organization within the donor's community, just as Fred and Marge have done throughout their lives with Sacred Heart, St. Mary's, St. Benedict's, and most recently with St. Michael's. Visitation will be held on Thursday April 27, 2017 from 2-4 pm and 6-9 pm at Holihan-Atkin-Barclay Funeral Home at 406 N. Bridge St, Grand Ledge MI with a Scripture Service at 8 pm. Mass of Christian Burial will be held at 11 am at St Michael's Catholic Parish 345 Edwards St Grand Ledge on Friday April 28, 2017; family will receive guests at the church for one hour prior to the service.

Margaret A. (Pitonyak) Forrester, age 84, of Grand Ledge Michigan, died on April 22, 2017, surrounded by the love of her family. Marge was born in Niagara Falls NY on April 6, 1933, daughter to John and Anna (Dolak) Pitonyak&#8206;, and sister... View Obituary & Service Information

The family of Margaret Ann Forrester created this Life Tributes page to make it easy to share your memories.

Send flowers to the Forrester family.