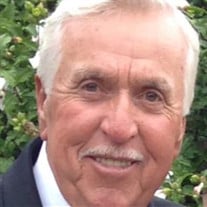 Lyle Young passed away Friday, January 8, 2021 after a long battle with pulmonary fibrosis. Surrounded by his family, he left this Earth in peace and with his faith in Jesus Christ. He was preceded in death by his wife of 49 years Sharon K Young, his brother, Richard Young and his parents Elmer and Marie young. He is survived by his three children and their families. Karen and Tony Wey, Dan and Leann Young and Debbie and Peter Brown, his wife, Patricia Fernald-Young and his extended Fernald family. Lyle will be best remembered by the way he cherished his relationships. He and Sharon began their journey dating as teenagers in the small town of Brown City. They married on September 15, 1961. Lyle worked for Halmich Sod Nurseries in Brown City until 1964, when he was given the opportunity to manage a farm in East Lansing. He and Sharon moved to East Lansing where they raised their three children and built a beautiful life together. They made many lifelong friends that shared many a New Year’s Eve, Saturday night dinners, and numerous vacations. They loved to entertain, cook for people in their home or cottage on Otsego Lake, and vacation every winter with their family and friends. There are 40+ years of memories across four generations in the Florida Keys, which was one of his favorite places to visit. He worked for Halmich Sod Nurseries for over 49 years. Hired by Wilber Johnson as a part-time summer employee proved to pay off for the both of them. Lyle was entrusted to build a sod nursery second to none, which he did with Sharon’s help. Year-after-year, with the love he had for the business, he was able to learn, grow, and gain the respect of his peers. He was instrumental in growing the farm that became one of the largest operating sod farms in the Midwest. His knowledge was sought-after by many, including the turf program at Michigan State University. He shared his knowledge, selflessly, with competitors and aspiring turf farmers without hesitation. Truly a humble man that loved what he did. He eventually purchased his own sod farm and took great pride in building that in later years with his son, Dan and grandson, Lyle. Young’s Turf will continue his legacy for decades to come. His crew and their families were especially important to him. His actions proved that daily, by the way he treated them. They saw early in their employment; he was not the typical boss. Families stayed with him for decades and second generations joined the crew because of his dedication and fairness. Many of his close friendships can be traced back to the sod farm. A fair man can do business with friends and vice-versa. He was proof of this. He married Patty later in life and together they made new traditions and enjoyed Florida trips to Lakeland. He shared his love for entertaining with her, and together they prepared many meals with friends from Brown City and attended the occasional Detroit Tigers baseball game during spring training. He loved her children and Grandchildren and cooked for them often. No Fernald child will ever forget the way he prepared a steak or a fried shrimp dinner. We will remember a man that was humble by nature, that loved his family and friends, and his life, for the true beauty that it was. He kept it simple and constant with all us. He knew deep relationships that last a lifetime take tender and constant care. Friendships are only true if time is invested. Life can be easy if you tend to it every day. To sum it up: keep it watered. An outdoor celebration of Lyle’s life will be held this summer. Arrangements by the Holihan-Atkin-Barclay Funeral Home, Grand Ledge. Share your memories and condolences online at www.holihanatkin.com

Lyle Young passed away Friday, January 8, 2021 after a long battle with pulmonary fibrosis. Surrounded by his family, he left this Earth in peace and with his faith in Jesus Christ. He was preceded in death by his wife of 49 years Sharon K Young,... View Obituary & Service Information

The family of Lyle Eugene Young created this Life Tributes page to make it easy to share your memories.

Send flowers to the Young family.