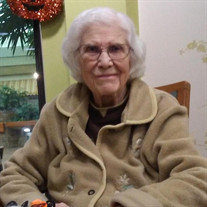 Leona Emma Hengesbaugh of Grand Ledge passed away December 29, 2017 at the age of 99. Leona was born July 12, 1918 in Eagle Twp., Clinton Co., MI to the late Kenneth and Augusta (Hoerner) Harrington. Leona was a loving stay at home mom who raised a daughter and two sons. She had a great sense of humor and enjoyed teasing her loved ones and friends. Leona along with her late husband, Lawrence who passed away on January 28, 1993, were a great team and not only in raising a family but also in Leona's creativity. She was known as a talented seamstress who used her White Sewing Machine to create some wonderfully unique stuffed animals, doll clothes and embroidered pillow cases that many of her family and close friends have as treasured keepsakes. Later in life, Leona would start each day in her rocking chair being thankful for the new day and faithfully praying for others. She always looked forward to several of her close friends coming by to visit her and working on word search puzzles. Many in her family also looked forward to some of Leona's frosted sugar cookies during Christmas. Leona's family would like to thank the staff of the Ingham County Medical Care Facility for the wonderful care and support they provided for her. Leona is survived by her daughter, Diane Swallen; grandchildren, Nicola (Jerry Joyce) Sysyn, Larry (Christine Morrow) Hengesbaugh, Gabrielle (Brian Molony) Sysyn, Staci (Shane) Wicke, Cami (Mike) Kanner and Kyli (Eric Downer) Hengesbaugh; great grandchildren, Aubrey Joyce, Lauren and Tyler Wicke, Zach, Jacqulyn and Savanna Hengesbaugh ; daughters-in-law, Nanci and Sherry Hengesbaugh. She was preceded in death by her parents, husband and sons, Neil and Garry. A Mass of Christian Burial will be celebrated Wednesday, January 3, 2018, 11:00 a.m. at St. Michael Catholic Church, Grand Ledge by The Reverend Fr. James Eisele. Interment will be in Oakwood Cemetery, Grand Ledge. Visitation will be Wednesday at the church from 10:00 a.m. until the time of mass at 11:00 a.m. Memorial contributions may be given to the American Cancer Society, Mid-Michigan Office, 1755 Abbey Road, east Lansing, Michigan 48823 or the Capital Area Humane Society 7095 W. Grand River Avenue, Lansing, Michigan 48906.

Leona Emma Hengesbaugh of Grand Ledge passed away December 29, 2017 at the age of 99. Leona was born July 12, 1918 in Eagle Twp., Clinton Co., MI to the late Kenneth and Augusta (Hoerner) Harrington. Leona was a loving stay at home mom who raised... View Obituary & Service Information

The family of Leona Emma Hengesbaugh created this Life Tributes page to make it easy to share your memories.

Send flowers to the Hengesbaugh family.