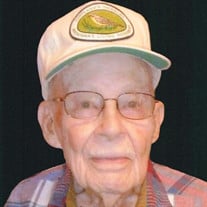 Laurence Roy Lawson passed away peacefully, surrounded by his family, October 14, 2015 at the age of 98. Larry was born in Lansing, Michigan, September 1, 1917, the son of the late Roy and Shirley (Williams) Lawson. He served in the U.S. Army... View Obituary & Service Information

The family of Laurence Roy Lawson created this Life Tributes page to make it easy to share your memories.

Laurence Roy Lawson passed away peacefully, surrounded by his...

Send flowers to the Lawson family.