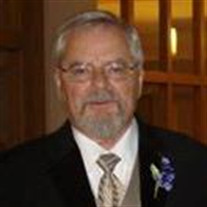 Larry E. Fitzpatrick of Grand Ledge a loving husband, father, grandfather, brother, uncle and friend passed away April 19, 2016 surrounded by his family. Larry was born November 17, 1941 in Alpena, Michigan to the late Emmett Mark and Natalie (Cole) Fitzpatrick. He graduated from Alpena Catholic Central High School, received an Associate’s Degree from Lansing Community College and was a Navy Veteran. Larry was a hard working. He was a computer programmer in the automobile industry and after retiring from GM he went to work for Chrysler for a period of time. In retirement he was always working on a project and looking toward the next one. Larry also taught electronics at LCC for several years. He is survived by his wife of over forty-nine years, Joyce M. (Henski); children, Jody (Todd) Naylor, Jenee (Matt) St. Germain and Larry (Cathy); grandchildren, Emily, Todd II, Alexander, Olivia, Sophia, Dominic and Nathalie; brothers, The Reverend James and Mark (Kris) Fitzpatrick along with several nieces and nephews. He was preceded in death by sister, Shirley Bolen. A Mass of Christian Burial will be concelebrated on Monday, April 25, 2016, 10:30am at St. Gerard Catholic Church, 4437 W. Willow Highway, Lansing, Michigan 48917 by Father James Fitzpatrick and Father David Fons. Rite of Committal will follow with military honors at Hillside Cemetery. Visitation will be Sunday from 4-8:00pm with a Rosary at 7:30pm at the Holihan-Atkin-Barclay Funeral Home, Grand Ledge. Memorial contributions may be given to St. Gerard Catholic Church.

The family of Larry E. Fitzpatrick created this Life Tributes page to make it easy to share your memories.

Send flowers to the Fitzpatrick family.