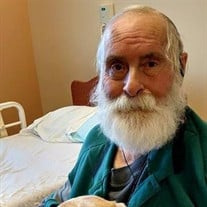 Kenneth Paul Russeau of Grand Ledge passed away October 2, 2015. Ken was born October 25, 1927 in Toledo, Ohio to the late Lynus and Gladys (Butler) Russeau. He was a WW II Navy Veteran and retired commercial artist for The Yellow Pages. Ken was a member of the Dewitt Christian Church and formerly helped plant The Ledges Church of Christ in Grand Ledge, Michigan which began meeting in his home. He enjoyed Bible history, collecting ancient and Civil War history memorabilia, metal detecting, and fishing. He was very proud to be the grandson of a civil war veteran and was actively involved with the Sons of Union Veterans of the Civil War (legal heir of the Grand Army of the Republic), one of the nation’s earliest veteran organizations keeping alive the memory of those who fought and died in our nations civil war. He is survived by son, Michael (Linda) Russeau and grandsons, Joshua and Aaron Russeau. He was preceded in death by wife, Carol and sons, Paul, James, and John Russeau. A funeral service will be held Wednesday, October 7, 2015, 6:30pm at the Holihan-Atkin-Barclay Funeral Home, Grand Ledge with Pastor Arthur Foster, officiating. The family will receive friends at the funeral home 1 hour prior to the funeral service. Interment with military honors will be at West Mound Cemetery Taylor, Wayne County, Michigan, Thursday, October 8, 2015, 11am. Memorial contributions may be given to Grace Hospice, 2205 Jolly Road, Okemos, Michigan 48864.

The family of Kenneth P. Russeau created this Life Tributes page to make it easy to share your memories.

Send flowers to the Russeau family.