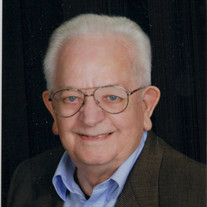 Kenneth Edwin Beach, 89, of Grand Ledge, passed away on April 29, 2020 at home, surrounded by his loving family. Born September 18, 1930 in Amberg, Wisconsin to the late Edwin and Anna (Werner) Beach, he graduated from Stephenson (MI) High School in 1948. After volunteering for service in the United States Air Force, he served his country in the Korean War as an aircraft mechanic. Upon his return, he attended Michigan State University and was awarded a B.S. in Engineering in 1959, with a specialty in packaging. After graduation, Ken spent 30 years as a packaging engineer at GM in Lansing (MI), retiring in 1986. In retirement, Ken and Caryl enjoyed summers in Michigan’s U.P, close to Stephenson and near his boyhood home on the Menominee River. Still, he looked forward to wintering in Arizona. He enjoyed spending time with family, hunting, fishing, woodworking, gardening, and playing billiards. He was an avid learner and reader. Ken was a devoted MSU Spartan fan, as well as an ardent Green Bay Packer fan. Ken is survived by his loving wife of nearly 64 years, Caryl; his five children, Kevin (Julie), David (Mary), Lisa (Tom) Stuecken, Nola (Greg) Cockroft, and Keene; 12 grandchildren; 7 great grandchildren; and his siblings, Karen (Chuck) Smeester and Norma (Mike) Nekhay. His mother and father and his stepmother, Edna (Krumrei) Beach, preceded him in death. A private funeral mass will be celebrated at St. Michael Catholic Church in Grand Ledge on Friday, May 8. Burial to follow at Wacousta Cemetery. In place of flowers, the family requests that memorial contributions be made in Ken’s name to the Arbor Day Foundation at https://50-million.everydayhero.com/us/kenneth-beach-memorial or to the Grand Ledge Area Fire Department at 500 N Clinton Street, Grand Ledge, MI 48837 You may watch the funeral mass for Ken at 11:00 am Friday on the St. Michael Church YouTube channel at this link: https://www.youtube.com/channel/UC0cHJ0g9uMkkSu5m0qpg2OA (Scroll down until you see May 8, 2020 - Funeral Mass) Arrangements by the Holihan-Atkin-Barclay Funeral Home, Grand Ledge.

The family of Kenneth Edwin Beach created this Life Tributes page to make it easy to share your memories.

Kenneth Edwin Beach, 89, of Grand Ledge, passed away on April...

Send flowers to the Beach family.