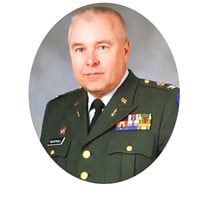 COL (Ret) Joe David McDowell was born July 15, 1949 to the late Walter D. and Carmen L. (Ewing) in Muncie, Indiana. He died March 10, 2017 in Tavares, Florida. He graduated from Ann Arbor High School in 1967. In 1968, Joe joined the Michigan Army National Guard and graduated from Officer Candidate school in 1977. In 1978, Joe married the love of his life, Cynthia. In 1985 he received a BA in Human Resources Management from Spring Arbor College and in 1988 a Masters of Public Administration from Western Michigan University. In 1999 he graduated from the US Army War College. During Joe’s remarkable 36 year military career, he served as platoon, company, and battalion commanders, Director of Surface Maintenance and Director of Human Resources. He retired in 2005 at the rank of Colonel. Joe served the City of Grand Ledge as a city councilman from 1990-92. After retirement, Joe and Cindy built a winter home in Tavares, Florida. They moved there permanently in 2014. Joe was an avid University of Michigan and Detroit Tigers fan. He also loved spending time on his boat and walking his dogs. His children and grandchildren were his pride and joy; he loved to brag about them to anyone who would listen. Joe is survived by his wife of 38 years, Cynthia; children Michael (Jane), Meghan (Eric) Morris and Ryan; grandchildren Brittney Reich, Mariko Martin, Tyler Harding, Isla, Annalise, Azalea and Zinnia Morris; sisters Jan (Rich) Krajniak and Joan (John) Pedraza and many nieces, nephews, aunts, uncles and cousins. In lieu of flowers, the family asks for memorial contributions to be made to the Wounded Warrior Project, 4899 Belfort Rd., Suite 300, Jacksonville, FL 32256. A memorial service will be held on May 22, 2017 at 11 am at Holihan-Atkin-Barclay Funeral Home in Grand Ledge. Visitation will be Sundayfrom 2-4 pm at the funeral home. Internment with military honros will follow at Fort Custer National Cemetery in Augusta.

The family of COL Joe David McDowell created this Life Tributes page to make it easy to share your memories.

Send flowers to the McDowell family.