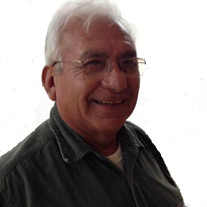 Jesus “Jesse” Jose Mares Perales, of Grand Ledge, a loving father, grandpa, brother and friend passed away July 26, 2017. Jesse was born November 30, 1942 in Delicias, Mexico. After the death of his mother, he was raised in Fresno, CA by his grandparents, Jose Concepcion Mares and Domitila Noriega Mares. Jesse was by trade a commercial roofer with Union Local 149. After retiring Jesse would not settle down, he continued doing repairs and handy work, and helping out his family. He was very connected with the Latino community and helped with translating, transportation, or anything needed. His passion was coaching and attending his grandchildren’s sporting events. He was very active in cheering them on and encouraging them to be the best they could be. Jesse will be remembered for his love and dedication to family, his hard work ethic, and helping others. He is survived by his daughters, Melissa Perales (Martin Voss), Amy Kramp and Lydia Millbrook (Roger) and their mother Mary Beachnaw; grandchildren Zachary, Cara, Alexander, Elvis, Max, Henry, Emma, Eliot and his sister, Teresa “Terry” Perales (Joe). A Mass of Christian Burial will be celebrated Tuesday, August 1, 2017, 11:00 a.m. at St. Michael Catholic Church, Grand Ledge by The Reverend Fr. James Eisele. Rite of Committal with military honors will follow at Oakwood Cemetery. Visitation Monday from 2-4:00 p.m. and 6-8:00 p.m. with a Scripture Service at 7:30 p.m. at the Holihan-Atkin-Barclay Funeral Home & Cremation Services, Grand Ledge. Memorial contributions may be given to Grand Ledge Youth Baseball, P.O. Box 15, Grand Ledge, Michigan 48837.

The family of Jesse Perales created this Life Tributes page to make it easy to share your memories.

Send flowers to the Perales family.