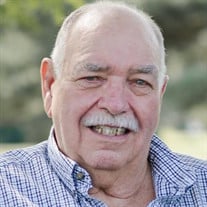 Jerry Dean Waldrop of Eagle passed away September 25, 2019 in Lansing, MI. He was born August 21, 1939 in Rockville, Indiana and raised by the late Virgil and Arizona (Floyd) Waldrop. Jerry graduated with the Grand Ledge High School Class of... View Obituary & Service Information

The family of Jerry Dean Waldrop created this Life Tributes page to make it easy to share your memories.

Send flowers to the Waldrop family.