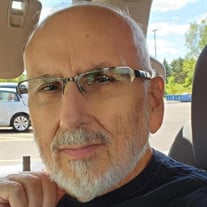 Our loving husband, father, grandfather, brother and brother-in-law, James Edward House Jr, passed away on August 3, 2021 at the age of 69. He had fought a hard war against Non-Hodgkins Lymphoma since he was diagnosed in August of 2020. He survived this disease and was on the road to a full recovery but there was a bump in that road that we were not expecting. He was born to the late James Edward Sr and Doris Marie (Jones) House on June 30, 1952 in Owosso, Michigan. After graduating from Chesaning High School in 1970 he entered Ferris State College where he earned a Bachelor of Science in Business (Insurance) in 1975. He was employed by Auto-Owners Insurance Company as a Home Office Bond Underwriting Coordinator where he met his bride, Judith Elaine. They retired on the same day on April 1, 2019 after Jim working there for 45 years. To say Jim was an avid reader is an understatement. His study is filled with books mostly on history, biographies and mysteries. In particular, he loved reading books on his favorite historical person of Abraham Lincoln. To see Jim without a book was unnatural. He was Stephen King’s Number One Fan, reading every one of his books and he loved his Detroit Tigers. Jim also enjoyed studying genealogy and classical music. Until he became ill he would be out each Saturday mowing his yard. Jim was such an attentive and loving husband. Like any father his children and granddaughter were extremely important to him. If he hadn’t heard from them in a couple days, he would begin to wonder if all was well with them. This amazing man will be remembered for his devotion to his family, his goofy wit and his somewhat odd sense of humor. Jim is survived by his loving wife of 43 years, Judith Elaine (Kiser), son Jonathan William H. Huss of Grand Ledge MI; daughter Kimberli Marie Henrietta House of Chicago IL; granddaughter Madison Nicole Huss of Webberville MI; sister, Mary Jo (Dennis) Owen of Grand Junction CO; Brother-in-law Tim Kiser of Lansing MI; Brother-in-law and sister-in-law Bill and Kathy Kiser of Hardeeville SC and his little furball cats Steve, Whisper and Ichabod. He was predeceased by his sister, Judith Ann (House) Bickel who passed away just this past June, 2021. A funeral service will be held Saturday, August 7, 2021 at the Holihan-Atkin-Barclay Funeral Home, Grand Ledge MI. Visitation will be on Saturday from 12:00 P.M. until the time of the service at 1:00. Should you care to make a memorial contribution in Jim’s honor, please consider the Capital Area Humane Society, 7095 W. Grand Rive Avenue, Lansing, Michigan 48906 (https://interland3.donorperfect.net/weblink/weblink.aspx?name=cahsad&id=23).

Our loving husband, father, grandfather, brother and brother-in-law, James Edward House Jr, passed away on August 3, 2021 at the age of 69. He had fought a hard war against Non-Hodgkins Lymphoma since he was diagnosed in August of 2020. He survived... View Obituary & Service Information

The family of James Edward House Jr. created this Life Tributes page to make it easy to share your memories.

Send flowers to the House family.