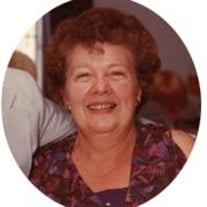 IONE EUNICE THOM Eagle, Michigan Age 92, passed away on December 13, 2017 in Grand Ledge, MI. She was born on her parents’ farm on April 28, 1925 in Merrifield, North Dakota, to the late Anee and Mabel Gregoire. Her parents had a party line telephone and when they called the Doctor to come and help deliver her, the Doctor was too late in arriving by horse and carriage and she was already born. She lived through the Great Depression and World War II and experienced rationing during the war of such things as sugar, coffee, nylons, gasoline, and car tires. She always said that Prohibition never affected the farmers in North Dakota because Grandma Mabel made homemade wine from choke cherries and crab apples on the farm. Ione graduated from high school in 1943, along with her future husband, Louis E. Thom. In 1943-1946 she worked in the emergency rooms at hospitals in both Grand Forks and Fargo, North Dakota, while she waited for her future husband to return home from the war. Ione and Louis were married in 1947, after Louis returned home from the South Pacific, where he served in New Guinea and the Philippines with the US Army, during World War II. After marrying, they moved to Michigan where Louis attended Michigan State College (now University) on the GI Bill and they lived on campus in married housing. Ione had fond memories of working at the Sparrow Hospital switchboard for two years while Louis attended college because she said she knew all of the hospital gossip from working the telephone switchboard. After college, Louis started his own plumbing business and worked in Lansing, Michigan and the surrounding communities, while Ione fielded the business calls and scheduled jobs and raised their growing family, which eventually grew to thirteen children. Ione was predeceased by her parents, her husband Louis, who passed away at age 86, her son Gregory, who passed away at age 57, and one brother, Kenny Gregoire. Ione served as the matriarch to the Thom family, ensuring her family always had a hot meal and home-made baked goods and she loved to listen to WITL radio station in Lansing while she worked fixing meals in the kitchen. She frequently called in to the “Tradio” program on WITL to sell items over the radio, long before the internet and Craigslist and E-bay were invented. She was a prayer warrior who taught her family to love and forgive.She loved her husband and all of her children and stood by them all through thick and thin, through trials and tribulations, and through achievements and happy times. She was active in the Lady’s Altar Society at each parish she attended, including Resurrection and Saint Mary’s Cathedral parishes in Lansing, Michigan and St Michael’s parish in Grand Ledge, Michigan. Although many of her Altar Society friends have now predeceased her, she never forgot any of them and talked of fondness about Altar Society meetings and her friends. She also remained a true friend to many neighbors, who resided nearby her various residences. She especially talked of fond memories of traveling to Rome, Italy with her husband and the Hans Larsen family. Ione stated that true friends are hard to find in life and should be treasured and honored. Ione is survived by her loving family: Children, Paul (Julie) Thom, Paula Busby, Chad (Debra) Thom, Mark (Tina) Andrews Thom, Lou Ann Thom, Kevin (Linda) Thom, Mary Kabia, Kara Kabia, Louis Thom Jr., Lora Thom, Ann (Paul) Leifker, and Rose Leifker, daughter-in-law Brenda Thom, wife to the late Gregory Thom, 26 grandchildren, 23 great grandchildren, 1 great great grandchild, sisters Willa MaeMercil of Crookston, Minnesota, Delores Brunette of Fargo, North Dakota, and Ada Ostgaard of California, and brother Dennis (Betty) Gregoire of Merrifield, North Dakota. A Funeral Mass will be celebrated Tuesday, December 19, 2017, 11:00 a.m. at Saint Michael Catholic Church, Grand Ledge by The Reverend Fr. James Eisele. Rite of Committal will follow at Saint Joseph Catholic Cemetery on Willow St., in Lansing. Visitation will be Monday from 4-8:00 p.m. with a Scripture Service at 7:30 p.m. at the Holihan-Atkin-Barclay Funeral Home, Grand Ledge. Memorial contributions may be made to St. Michael Catholic Church, 345 Edwards Street, Grand Ledge, Michigan 48837 or St. Michael School, 345 Edwards Street, Grand Ledge, Michigan 48837. Share your memories and condolences online at www.holihanatkin.com.

IONE EUNICE THOM Eagle, Michigan Age 92, passed away on December 13, 2017 in Grand Ledge, MI. She was born on her parents&#8217; farm on April 28, 1925 in Merrifield, North Dakota, to the late Anee and Mabel Gregoire. Her parents had a party... View Obituary & Service Information

The family of Ione Eunice Thom created this Life Tributes page to make it easy to share your memories.

Send flowers to the Thom family.