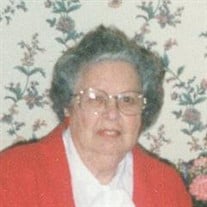 Helen M. Elowski of Delta Township a loving wife, mother, grandmother and friend passed away February 17, 2015. Helen was born June 18, 1922 in Peck, Michigan to the late Roland and Myrtle (Aseltine) Scribner. She was a charter member of Good... View Obituary & Service Information

The family of Helen Marie Elowski created this Life Tributes page to make it easy to share your memories.

Send flowers to the Elowski family.