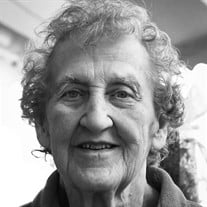 Helen M. Baird a longtime Grand Ledge resident passed away December 13, 2015. Helen was a determined woman. She was born, along with her twin brother Harry, on August 20, 1920 to the late Harry and Nora Veltman in a farmhouse on Mt. Hope Highway. Helen graduated from Grand Ledge High School Class of 1937 and on January 17, 1942 she married Bill Baird before he headed out to serve his country. Helen worked as a secretary at Oldsmobile before joining Bill as owners of Ferndale Dairy. She was active in the Grand Ledge Garden Club, Kiwanis Club, founding member of the Harmony Club, ambassador for the Chamber of Commerce, St. Michael's Altar Society and delivering Meals-On-Wheels with Bill for many years. Most of her life she was a caregiver, helping out her family after her mother died when she was 16, taking care of her sister Florence when her health faltered and providing the best care to Bill when his legs failed him. Her "I can do it" attitude kept her going strong even as her body started to fail her. She is preceded in death by her husband Bill; siblings, Harry and Florence. Surviving to admire her determination are her sons/daughters-in-law: Dennis /Lynn and Buzz/Marianne, her daughters/sons-in-law: Marilyn/Bob Russo and Jan/Dan Hughes; her 8 grandchildren: Eric, Matthew, Ryan, Julia, Kyle, Alissa, Nora and Emma along with 2 great grandchildren: Tagen and Sora with another on the way. We want to thank all the wonderful caregivers at StoryPoint and Heartland Hospice for helping mom through her final chapter of life. A Mass of Christian Burial will be celebrated by The Reverend Fr. James Eisele Wednesday, December 16, 2015, 11:00am at St. Michael Catholic Church, Grand Ledge. Rite of Committal will follow at Oakwood Cemetery, Grand Ledge. Visitation will be held Tuesday from 2-4pm and 6-8pm at the Holihan-Atkin-Barclay Funeral Home, Grand Ledge. Memorial contributions may be given to GLEAP, P.O. Box 402, Grand Ledge, MI 48837 or the Capital Area Humane Society, 7095 W. Grand River Ave., Lansing, MI 48906 .

Helen M. Baird a longtime Grand Ledge resident passed away December 13, 2015. Helen was a determined woman. She was born, along with her twin brother Harry, on August 20, 1920 to the late Harry and Nora Veltman in a farmhouse on Mt. Hope Highway.... View Obituary & Service Information

The family of Helen M. Baird created this Life Tributes page to make it easy to share your memories.

Send flowers to the Baird family.