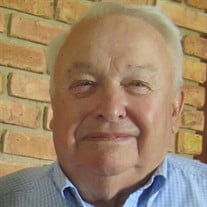 H. Elwood Day a longtime Wacousta resident passed away November 29, 2019 at home surrounded by his loving family. Born to Harley and Hettie (Stump) Day in Ovid, Michigan on November 22, 1929, Elwood has now been reunited with his wife and love of his life, Joyce (Curtis) who passed away June 11, 2017. Elwood loved his family and was a loyal friend who will be greatly missed. He graduated from Bath High School Class of 1948, and was Captain of the State Champion 6 Man Football Team in 1947 and 1948 that was inducted into the Greater Lansing Area Sports Hall of Fame in 2007. He served his country in the Army of the United States during the Korean War serving in Germany. He owned and operated H. Elwood Day Construction Co. and was a member of the Home Builders Association of Greater Lansing. He enjoyed traveling with his wife, Deer Camp near Hillman, MI and had many successful hunting and fishing trips. He is survived by children, Gary L. (Sydney), Kevin L. (Tami), Julie E. Day and Lisa M. (Mike) Heiler; grandchildren, Nathan Day, Ashleigh (Matthew) Schuchardt, Mason and Jeffrey Day, Samantha and Kylie Heiler; great grandchildren, Lucy, Nora, Isabel and Jack Schuchardt. Elwood was preceded in death by his son, Jeffrey; grandchildren, Jesse and Monica Day; 4 brothers and 4 sisters. A funeral service will be held Thursday, December 5, 2019, 11:00 a.m. at the Holihan-Atkin-Barclay Funeral Home, Grand Ledge. Interment will follow with military honors at Wacousta Cemetery. Visitation will be Wednesday from 2-4:00 p.m. and 6-8:00 p.m. Memorial contributions may be given to the American Cancer Society, Mid-Michigan Office, 1755 Abbey Road, East Lansing, Michigan 48823 (https://donate3.cancer.org/?lang=en) or the Alzheimer’s Association, Michigan Great Lakes Chapter, 2111 University Park Drive, Suite 200, Okemos, Michigan 48864 (https://act.alz.org/site/Donation2?df_id=32112&32112.donation=form1&_ga=2.238324928.1124559734.1575208031-1203740112.1575208031).

H. Elwood Day a longtime Wacousta resident passed away November 29, 2019 at home surrounded by his loving family. Born to Harley and Hettie (Stump) Day in Ovid, Michigan on November 22, 1929, Elwood has now been reunited with his wife and love... View Obituary & Service Information

The family of H. Elwood Day created this Life Tributes page to make it easy to share your memories.

Send flowers to the Day family.