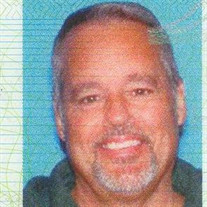 Gary D. Morris Jr. of Delta Twp., a loving husband, father, grandfather, brother and friend passed away February 8, 2017 in Lansing. Gary was born September 27, 1959 to Gary and Carol (Allen) Morris. Gary worked for the Michigan Department of Corrections. He had a great sense of humor and looked for ways he could bring joy to others and make them laugh. He was a devoted family man who was so proud of his children and their biggest supporter. He was an avid outdoorsman, enjoyed music, playing the guitar and traveling, especially taking spontaneous trips. At the end of last summer the whole family went to Crooked Lake for the week where they spent some valuable time together and created some great memories. He is survived by wife, Suzanne (Keegstra); children, Jim Morris, Jon (Kassandra Prudden) Morris, Ashton (Hakeem Dodd) Morris, Austin Shattuck, Ba Blamo and Jackson Keegstra; grandson, Lukah David; mother, Carol Morris; sisters, Laurie Morris and Linda Ponce along with his second wife, Stacey White. Gary was preceded in death by father, Gary D.; first wife, Julie and brother-in-law, Tom Ponce. A funeral service will be held Monday, February 13, 2017, 11 am at the Holihan-Atkin-Barclay Funeral Home, Grand Ledge. Interment will follow at Danby Twp. Cemetery. Visitation will be Sunday from 2-4 & 6-8 pm at the funeral home. Memorial contributions may be given to the American Cancer Society, Mid-Michigan Office, 1755 Abbey Road, East Lansing, Michigan 48823.

The family of Gary David Morris Jr. created this Life Tributes page to make it easy to share your memories.

Send flowers to the Morris family.