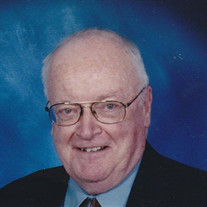 Frederic J. Forrester, age 84. Of Grand Ledge Michigan, died on August 29, 2016, surrounded by the love of his family. Fred was born in Niagara Falls NY on May 30, 1932, son to Joseph James and Helen (Murphy) Forrester‎, and brother to Joseph James Forrester III. It was in Niagara Falls that he met and fell in love with his beloved Marge, his wife of 61 years. Fred graduated from Purdue University with a Bachelor's of Science in Chemical Engineering and attended Northwestern University for graduate education pursuing a PhD in Thermodynamics. He worked in various roles as a brilliant chemist, scientist, an innovator, as well as leader with Union Carbide, Mobay, and with Dart Container Corporation. Fred and Marge have nine children, with each of them possessing a university education, and twelve grandchildren, all of whom bring light and love to their grandparents' lives. In addition, they have an extended circle of family and countless friends who contribute loving richness to their lives. He is survived by his wife Margaret (Pitonyak); his children: Mary Ann and John (Akron, OH); Eileen (Verona PA); Rick and Linda (Canonsburg PA) and their sons Eric and Kevin; Joe and Adriana (Falls Church VA) and son Shane; Betty and Bill (Rockford IL) and their children Seth and Anna; Pat (Fenton MI), Kathleen and Daniel (Tomball TX) and their son Alex; Tom and Paula (Cohassett MA) and their daughters Jill and Allysson; and Tim and Kelley (Bloomfield Hills MI) and their sons Blake, Macklin and Riley. He shared his love of learning and living with children, grandchildren, and relatives, engaging in gregarious conversations and discussions with each, from an early age. He loved sports, singing, music and performed in local choirs and musicals as well as being a cantor at various churches of his residence. Fred was a football coach, baseball coach, softball coach, basketball coach, a music coach, but most importantly, a life coach who taught with dignity, decency and humility. Fred inspired others to be better through grace. Fred loved to laugh and to host anyone that arrived like they were a long lost friend in need of belonging. He was admired by all that knew him, and a friend to all. In lieu of flowers, and in keeping with Fred and Marge's dedication to education, they ask that donors commit additional funds to the continuing education of their family members as they have done throughout their lives. They ask that any incremental current donation be made to the donor's chosen religious institution or charitable organization within their communities, just as Fred and Marge have done with Sacred Heart, St. Mary's, St. Benedict's, and most recently with St. Michael's throughout their lives. Visitation will be held on September 6th from 2-4 pm and 6-9pm with a Scripture Service at 8 pm at Holihan-Atkin-Barclay Funeral Home at 406 N. Bridge St, Grand Ledge MI. Mass of Christian Burial will be held at 11 am at St Michael's Catholic Parish 345 Edwards St Grand Ledge on September 7, 2016; family will receive guests at the church for one hour prior to the service.

Frederic J. Forrester, age 84. Of Grand Ledge Michigan, died on August 29, 2016, surrounded by the love of his family. Fred was born in Niagara Falls NY on May 30, 1932, son to Joseph James and Helen (Murphy) Forrester&#8206;, and brother... View Obituary & Service Information

The family of Frederic J. Forrester created this Life Tributes page to make it easy to share your memories.

Send flowers to the Forrester family.