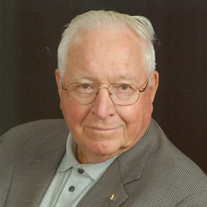 Fred Harry Gehlhaar Grand Ledge Age 89 passed away July 17,2015 He was born April 8th,1926 in Pittsburgh Pa. to Fritz and Hermine ( Meitza ) Gehlhaar who immigrated from Germany in 1924 with their 5 week old Daughter Brigetta . The Family moved to Lansing , Mi when Fred was one year old , then to a farm in the Grand Ledge area when he was 6 years old. Fred’s education included the one room country school house, “Oneida Center” through the 8th grade and graduated from Grand Ledge High School in 1944. He attended selected night courses at Michigan State University, Lansing Community College and University of Michigan. Fred served an Apprenticeship at Oldsmobile as a Toolmaker. He retired from General Motors after 40 years as a Supervisor in Manufacturing Engineering . Fred served His country during WWII as an Infantry Man with the 87th Div. , entering combat just after the “ Battle Of The Bulge “ . On June 20, 2015 he was awarded the Bronze Star for his service. Fred was a life long member of Immanuel Lutheran Church , served on Counsel as President, he also served on many other committees . He was a member of the American Legion Post 48 , life member of VFW post 3293 including serving on the Honor Guard. He was a life member of Capitol Area Sportsman’s League and a member of General Motors Retirees Association . Fred was preceded in death by His Parent’s, a Sister Brigetta ( Leonard ) Wallerstedt ,a Brother Harry ( Maxine ) Gehlhaar , Wife, Arleen ( Schaefer, Cole ) Gehlhaar. He is survived by His Wife Mary L .( Fountain ) Gehlhaar, Stepson Duken ( Ellen ) Cole , Daughters Linda ( Richard ) Hammerberg , Karen ( Kaschner ) ( Manuel ) Ibarra, Terre Gehlhaar, a Stepdaughter Ann ( Keith ) Landry, a Stepson Kenneth ( Patricia ) Fountain, 12 Grand Children, 10 Great Grand Children and many nieces, nephews and Cousin’s. Fred loved Fishing, Hunting, Gardening and he spent a second hobby career Wood Working in His Shop . A funeral service will be held Wednesday, July 22, 2015, 11:00am at Immanuel Lutheran Church, 517 S. Clinton Street, Grand Ledge 48837 with The Reverend Chuck Foerster, officiating. Interment with military honors will follow at Oakwood Cemetery. The family will receive friends Tuesday from 4-8:00pm at the Holihan-Atkin Funeral Home, Grand Ledge and one hour prior to the funeral service at the church.. Memorial contributions may be given to Immanuel Lutheran Church or VFW Post 3293, 731 N. Clinton Street, Grand Ledge, Michigan 48837.

Fred Harry Gehlhaar Grand Ledge Age 89 passed away July 17,2015 He was born April 8th,1926 in Pittsburgh Pa. to Fritz and Hermine ( Meitza ) Gehlhaar who immigrated from Germany in 1924 with their 5 week old Daughter Brigetta . The Family... View Obituary & Service Information

The family of Fred H. Gehlhaar created this Life Tributes page to make it easy to share your memories.

Send flowers to the Gehlhaar family.