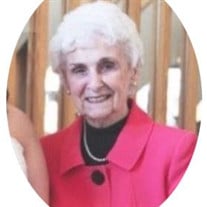 Fay D. Shane August 15, 1922 to January 17, 2020 Fay passed away peacefully January 17th, 2020 surrounded by her loving family. She was born August 15, 1922 in Evart, MI to Fred and Ethel Dible. Fay married Charles W. Shane Jr. on September 25th, 1948. She worked for Doty Insurance in Grand Ledge, MI for 25 years. In 1975 Fay started working for the city of Grand Ledge and in 1977 was appointed City Clerk. Fay retired in 1985 and her and Chod moved to their up north home in Lake George, MI. After many enjoyable years there, they moved to Cadillac, MI to be closer to their family. Fay loved to sew, do crosswords, and was involved in the Daisy Chain Cadillac Elks Chapter. They were long time members of the First Congregational Church of Grand Ledge. Fay loved nothing more than her grandchildren and great grandchildren. She is survived by her son Michael Shane of Lansing; daughter, Debbie (Kevin) Dent of Cadillac; grandson, Lucas (Kelly) Dent of Cadillac and granddaughter Tana (Andrew) Hutchens of Traverse City; Great grandchildren, Trenton, Dennis, Charlie, Mia, and Vivian Dent, Shane and Raegan Hutchens. Fay was preceded in death by her husband Charles Jr.; sister, Gwen; brothers, Guy, Jack, Louie, Frank, and Richard. Fay had some wonderful caretakers the last part of her life. A special thank you to Linda Warren, the staff at Green Acres Assisted Living facility and Hospice of Michigan. A funeral service will be held Tuesday, January 21, 2020, 2:00 p.m. at the Holihan-Atkin-Barclay Funeral Home, Grand Ledge. Visitation will be 1 hour prior to the service. Interment will follow at Oakwood Cemetery. In lieu of flowers, memorial contributions in Fay’s memory may be given to Hospice of Michigan, 989 Spaulding SE, Ada, Michigan 49301 or click link to donate online ( https://secure2.convio.net/hom/site/Donation2?idb=1404367317&DONATION_LEVEL_ID_SELECTED=1&df_id=1500&1500.donation=form1&idb=0).

The family of Fay D. Shane created this Life Tributes page to make it easy to share your memories.

Send flowers to the Shane family.