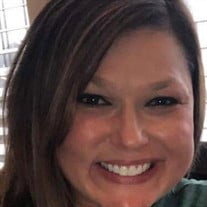 Ewa Wolek (Suryak) loving wife, mother, daughter, sister, and friend left the world too soon at the age of 39 on Saturday, January 8, 2022. Ewa was born on December 15, 1982 in St. Polten, Austria, to Krzysztof and Marzanna Suryak. She was a 2001 graduate of Williamston High School and earned her bachelor’s degree in marketing and management at Northwood University in 2006. While earning her degree, she began work at the State of Michigan with the Department of Community Health where she remained loyal to her career until her death. Ewa was selfless, generous, and cared for all. She enjoyed cooking, gardening, crafts and spending time with her family. She was a giver and always wanted to see someone smile. Truly the one to give you the shirt off her back, she was the first with a message of encouragement, and would always stand by offering her support to whom ever needed it. The greatest joys of her life were the many smiles and giggles she brought to her nieces, nephews and her own two sons. Her boys were the light of her life and lived for, as she would say, “the greatest job I’ll ever have” as their mother. Surviving to cherish her beloved memory are her husband of 13 years, Greg Wolek and their two sons, Octavian (11) and Xavier (6). Her mother Marzanna, sisters Marta (Ryan) Bartolotti, and Sandra (Trevor) Sorensen. Father-in-law Jay Wolek and sisters-in-law Aubrey Wolek and Christen Wolek. Also forever missing her are her adored nieces and nephews, Melissa (24), Jenna (19), Fiona (9), Peytyn (9), Silas (6), Audrey (3), and Maverick (1), as well as countless friends and family. She is preceded in death by her father Krzysztof Suryak and her mother-in-law Mary Lou Wolek. A memorial gathering will be held Sunday, January 16, 2022 from 12:00-3:00p.m. at Holihan-Atkin-Barclay Funeral Home, Grand Ledge. Memorial contributions in Ewa’s name may be given to benefit her children, Octavian and Xavier. Share your memories and condolences online at www.holihanatkin.com

Ewa Wolek (Suryak) loving wife, mother, daughter, sister, and friend left the world too soon at the age of 39 on Saturday, January 8, 2022. Ewa was born on December 15, 1982 in St. Polten, Austria, to Krzysztof and Marzanna Suryak. She was... View Obituary & Service Information

The family of Ewa Wolek created this Life Tributes page to make it easy to share your memories.

Send flowers to the Wolek family.