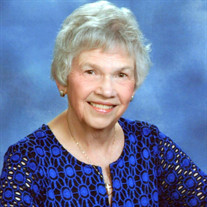 Eunice Marilyn Traill of Grand Ledge passed away on September 9, 2021. Eunice was born on June 11, 1936 in Lansing, MI to Frederick and Mary Sova. She grew up on the east side of Lansing and attended Lansing Eastern high school. She met Ron Traill, the love of her life, at a snowy St. Patrick’s Day dance and hesitantly agreed to allow him to drive her home. That was the beginning of a wonderful life together. They raised their children in Grand Ledge, Michigan. Eunice enjoyed playing bridge with her dear friends, she spent many summers sailing with Ron and she would always be the first one on the dance floor at a wedding. She was kind to everyone she met, always asking their name and learning a little personal story. When asked, Eunice described herself as a “professional volunteer”, but her family was the center of her life. Her children, grandchildren and great grandchildren brought her great joy. She touched the hearts of many and they touched hers. Her wonderful friends and neighbors will miss her very much. That beautiful house in the woods will not be the same without Eunice’s loving attention to detail. Eunice is preceded in death by her husband, Ron Traill, who waits for her with loving arms and her brother, Frederick Sova. She is survived by her children, Dr. Mark Traill of New Buffalo, MI and Michelle (Kevin) Traill-Crosser of Lansing, MI, by her grandchildren, Elizabeth (Stephen) Spierdowis of Carmel, IN, Anthony (Sara) Traill of Chicago, IL, Nicholas (Ashley) Crosser of Lansing, MI, K Scott Crosser of Hudsonville, MI and Madison Crosser of Lansing MI and by her great-grandchildren Isabella, Grace, Genevieve, Max and Lucy Spierdowis, Julian Traill and Islay Crosser. She is also survived by her sister, Mary Sova and brother, John Sova; brothers-in-law, Robert (Lois) Traill, Michael (Binnie) Traill by her sister-in-law Patricia Traill and by numerous nieces and nephews. A Mass of Christian Burial will be celebrated on Tuesday, September 14, 2021, 10:30am at St. Gerard Catholic Church by Father Bob Bacik. Rite of Committal will follow at St. Joseph Catholic Cemetery. Visitation will be Monday from 4-6:30pm with a Rosary at 6:30pm at the Holihan-Atkin-Barclay Funeral Home, Grand Ledge and Tuesday at the church from 9:30 until the time of the mass at 10:30am. In lieu of flowers, Eunice would appreciate donations to St. Gerard Church or to a charity of your choice.

Eunice Marilyn Traill of Grand Ledge passed away on September 9, 2021. Eunice was born on June 11, 1936 in Lansing, MI to Frederick and Mary Sova. She grew up on the east side of Lansing and attended Lansing Eastern high school. She met Ron... View Obituary & Service Information

The family of Eunice Marilyn Traill created this Life Tributes page to make it easy to share your memories.

Eunice Marilyn Traill of Grand Ledge passed away on September...

Send flowers to the Traill family.