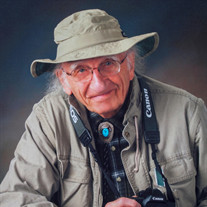 ERNST WERNER FLOETER Grand Ledge Ernst W. Floeter, age 90, of Grand Ledge, passed away August 29, 2015 after six months with pancreatic cancer. He died peacefully, surrounded by family. Born August 8, 1925, in Stettin, Germany, to Dr. Ernst and Elisabeth (Glasenap) Floeter, Ernst W. came of age during WWII and was conscripted into the German army. He was, in his words, liberated by the Americans at Normandy, spending 22 months in the U.S. as a POW - the first step toward his adopted home. After his return, he studied photography, and stole across the border to West Berlin to marry Barbara Walburg Hildebrand in 1953. Together with their first child, they immigrated to the U.S. in 1957, sponsored by All Saints Episcopal in East Lansing. By 1960, two children were added and the family settled in Grand Ledge, where Ernst opened a portrait and wedding studio. Over the next 55 years, he photographed thousands of people, as well as the changes and events of Grand Ledge. He served in many roles as an active member/office holder of Immanuel Lutheran, Jaycees, Rotary, Chamber of Commerce, Ledge Craft Lane, Liederkranz, Professional Photographers of Michigan, GL Chairman of the Bicentennial, and as GL’s Uncle Sam - most recently as Grand Marshal in June. Often found playing harmonica, his last tune, six days before he died, was “Ode to Joy.” Through his autobiography, “I’ll See You Again, Lady Liberty,” and his speaking engagements, Ernst was privileged to share his story. Having lived a life of gratitude for freedom, love of family and friends, world travel, and a good beer, Ernst leaves behind many who are grateful for his presence in their lives. He is preceded in death by his parents, wife, Barbara in 1997, and sister, Gisela. Ernst is survived by his children, Dorothea (Charlie) Martin, Cornelia (Roger Marshall) Floeter, Dietrich (Annie) Floeter; grandchildren, Neil, George, and Faith; and great-grandson, Jasper. The family wishes to acknowledge Sparrow Hospice Caregivers, Jim, Angie, and Casey. A funeral service will be held at St. Michael Church in Grand Ledge, Friday, September 4, at 11:00 a.m. Family will receive visitors one hour before the service, luncheon following. Visitation will be at Holihan-Atkin Funeral Home in Grand Ledge, Thursday, September 3, 4:00 - 8:00 p.m. Contributions may be made in Ernst’s name to Sparrow Hospice or Immanuel Lutheran Church. Cremation has taken place per Ernst’s wishes. He will be interred at Immanuel Lutheran Church Memorial Garden at a later date.

The family of Ernst W. Floeter created this Life Tributes page to make it easy to share your memories.

Send flowers to the Floeter family.