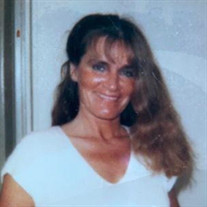 Elizabeth Ann (Brummett) Peterson of Indianapolis passed away peacefully at sunrise on November 21, 2020. Elizabeth was born February 26, 1944 in Martinsville, Indiana to the late Alvin and Ruth (Quakenbush) Brummett. Elizabeth, also known as “the brain”, graduated from Martinsville High School Class of 1962. After graduating, she moved to Indianapolis and worked for the Circle Theatre and the Indiana War Memorial Museum. Her career was spent working as an Administrative Assistant in Workforce Development for the State of Indiana and she was also a Union Steward. Elizabeth had a lifelong love of nature and wildlife and was an avid supporter of the National Wildlife Federation. She was also a lifelong learner and enjoyed the history of her family heritage and lineage. She is survived by her children: Erik (Maggie), Ulrika (Daniel) Zay, and Wade; grandchildren: Jenoa and Oliver Zay, and Brooke Peterson; sister, Mary Wright; half-sister, Sheila (Larry) Lacer; step-sisters: Geneva Fleener and Cindy (John) Manning; brother-in-law, Melvin Roesener; and many nieces and nephews. Elizabeth was preceded in death by her father and step-mother, Alvin and Florence Brummett; mother, Ruth Brummett; infant sister, Carolyn; sister, Rita Roesener and step-brothers, Stephen and David Ferrand. A graveside service will be held Wednesday, December 2, 2020, 10:00 a.m., in the Greenlawn Section of New South Park Cemetery in Martinsville. Memorial contributions in Elizabeth’s name may be given to the National Wildlife Federation, P.O. Box 1583, Merrifield, VA 22116 or to the Wheeler Mission, 205 East New York Street, Indianapolis, IN 46204. Arrangements by the Holihan-Atkin-Barclay Funeral Home, Grand Ledge.

The family of Elizabeth Ann Peterson created this Life Tributes page to make it easy to share your memories.

Send flowers to the Peterson family.