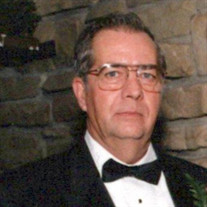 Douglas D. Gilbert, 86 years old of Lansing, passed away on Jan 20th Doug was proudly employed by Bud Kouts Chevrolet for an amazing 63 years. He began his career in 1955 as a technician and grew to become an invaluable employee and the Truck Sales manager. He met numerous clients during those years, they all left the dealership with a new friend and a new truck! His pleasant personality & customer service earned him many awards including his treasured Chevrolet “Legions of Leaders” sales award. Doug was born in a farmhouse in Portland on September 9th 1935, the middle of 9 children. He told stories of life on the farm, like eating squirrel, rabbit & pheasant stew and raising sheep, pigs, chickens and cows. Doug served in the US Army and was stationed in Puerto Rico. The Army was not enthused about him being a “southpaw”. In the 50’s, he could be found at Capital City Speedway, racing as a stock car circuit driver. He is survived by his wife Julie of 35 years, sister Mary and brother Jim. His Children; Lucinda, Dawn (Frank), Ronald, Angela, Lisa (John), Randy (Jennifer) & stepson Reggie. His Grandchildren; Chad, Nathan, Danielle, Skylar, Logan, Chase and Tabitha and many great grandchildren. He is additionally survived by his mother-in-law Ellie Sandborn, sister-in-law Cindy Stump (Tim) and brother-in-law Jon Hayden (Anne). He always had an interesting story and good conversation; like eating sautéed alligator in Florida. He enjoyed traveling, boating in Grand Haven & growing fresh vegetables. He will be lovingly remembered for his cooking, especially his homemade bean soup and baked beans. Per Doug’s request no public services will be held. In his memory, donations can be made to Sparrow Hospice House of Mid-Michigan. https://secure.qgiv.com/for/spaheasys/ Arrangements by the Holihan-Atkin-Barclay Funeral Home, Grand Ledge.

Douglas D. Gilbert, 86 years old of Lansing, passed away on Jan 20th Doug was proudly employed by Bud Kouts Chevrolet for an amazing 63 years. He began his career in 1955 as a technician and grew to become an invaluable employee and... View Obituary & Service Information

The family of Douglas Duane Gilbert created this Life Tributes page to make it easy to share your memories.

Send flowers to the Gilbert family.